The following interview segments are with former prostitute, Wendy Ellis, also known as Wendy Cortez in original stories that surfaced from Hustler magazine back in 2007.  Ellis originally came forward with allegations that she had serviced Vitter here in New Orleans during the height of the prostitution scandal involving the D.C. madame, Debra Jean Palfrey.

After speaking with Ellis, she told me that the Hustler interview was not totally accurate and not only did they publish a small portion of the story, some of the facts were misconstrued.

Upon meeting her, she informed me that she was terminally ill with an advanced form of lupus. She agreed to let me interview her because she wanted to "set the record straight" in the time she has left.

The interview lasted about an hour.  This first segment details how she first came into contact with David Vitter and how their relationship developed, one she said lasted for about three years from around 1998 through 2000:

Wendy Ellis on how she met Vitter - 1 from Jason Berry on Vimeo.

The next segment is about her pregnancy in 2000:

Wendy Ellis on the baby - Master from Jason Berry on Vimeo.

I asked her to further detail her alleged relationship with Vitter.  In the time frame Ellis says she carried on a relationship with Vitter, 1998 to 2000, he was originally in the Louisiana House of Representatives where he served from 1992 to 1999.  In 1999 he won a seat in the U.S. House of Representatives in Louisiana’s 1st Congressional district:

Wendy Ellis on Relationship Development MASTER from Jason Berry on Vimeo.
In respect to the ring that she claimed was given to her by Vitter, she said she thought he gave his wife the exact same ring.  This is a picture of it: 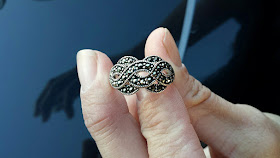 Of course the obvious question is why she is coming forward with this story now.  Aside from her failing health, speaking with her off camera, she explained to me that she was under an exclusivity contract with Hustler up until a few months ago.  Originally Hustler was considering doing a follow up story with her during this campaign cycle but she told me they suddenly changed their mind and terminated their relationship with her.  She said she was told by an employee at Hustler that Larry Flynt had no interest in generating negative press about Vitter any longer:

To be clear, Senator Vitter has denied he ever solicited prostitutes in the state of Louisiana.  I asked her about this denial:

Ellis did pass a lie detector test paid for by Larry Flynt and administered by Edward Gelb, a former president of the American Polygraph Association.

I also asked her if she could say one thing to Senator Vitter now, what would it be:

Wendy Ellis what she would say to Vitter - 5 from Jason Berry on Vimeo.

Ellis said the escort service she worked for operated out of 905 Dumaine Street in the French Quarter.
I asked her about her health, later on in the interview:

Wendy Ellis on health MASTER from Jason Berry on Vimeo.

I have talked to numerous sources who contradict the Senator's original claim that he never solicited prostitutes in the state of Louisiana but so far Wendy Ellis is the first person who was willing to go on the record about it.  I believe there will be more information I can publish in the coming weeks.

It is very important to her, and very important to me, that the identity of the child remain anonymous and I realize that it would be the one foolproof way to corroborate her story but I believe it can be corroborated by other means than putting the child's well being at risk.  I do know more about the adoption and I personally believe the information she provided in this interview to be true.

I had contact with David Vitter's legal counsel and repeatedly requested an interview with him on the phone to address the story but his lawyer stated he was too busy to speak with me.

This post, forgive the overused adage, really is the tip of the iceberg.  I have much more information I will share in the near future, from this interview and hopefully others, as I obtain it.  Stay Tuned.

UPDATE:  In this WDSU article it states "..the claim of three-year relationship is contradicted by legal documents that show Ellis was incarcerated for at least some of that time -- including part of 2001 and 2002."

Aside from "at least some time" being a very ambiguous statement, that does not "contradict the claim of a three-year relationship". In fact, Ellis told me about the 2001/2002 incarceration in the interview:

Wendy Ellis on what happened after the adoption from Jason Berry on Vimeo.


Just to clarify, I have only posted a small portion of the interview and information Wendy shared.  I am available to any media outlet if they wish to discuss the story before they publish.