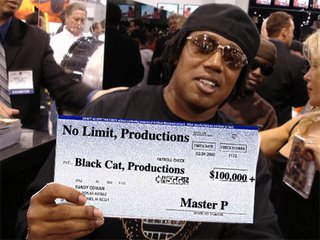 Yo Homeys....this allegation came in via the comment section, once again, from an Anon. I'm going to write a poem to my Anons one day, or maybe a rap. The double entendre is just too tempting.

Black Cat Productions is one of Nagin's many mystery companies. So....Ponder this:

JP....for all you curious cats....is Jefferson Parish...our next door neighbor. They are a separate nation, when it comes to laws and the perception of...well.... the nature of perception.

So if he took a trip to Hawaii on Imagine's bill...that's a smoking gun. If he actually funneled "hundreds of thousands" of greenbacks in campaign contributions through Black Cat.....that's a bomb crater....as big as the "hole in the ground" he referred to in NYC.

I got another post on AFO...which I already knew about. I was holding off because i wanted to get a better picture. That post is forthcoming.
Posted by Jason Brad Berry at 9/29/2006 05:19:00 PM

Man! Wonka's gonna regret the day he sent out those cookies.

Oh my goodness! More ammo for a Recall. *giggles*

This is getting juicier and jucier! I'm very impressed!