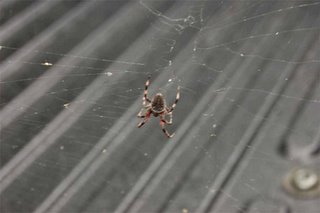 Her name is Charlotte, the name given to her by my son. She (if she is a she) has gone from a nuisance to a novelty to an obsession for me.

She first showed up in the back of my pick-up truck about 3 months ago, or at least that's when I first noticed her web. I took a stick, twisted the web around it and threw it away. The next day the web was back.

This scenario went on for about a week until finally I caught her in the act of spinning it. I was about to take my shoe off and squash her against the tailgate, but I became enthralled watching her do her thing. She intrigued me...impressed me. I decided to give her the real estate for a little while. I knew I'd be travelling to New Olreans from D.C. in a few days, so I figured I'd give her a reprieve until she had to face the perils of I-85 at 90mph.

So I drove back to N.O. and pretty much forgot about her. A couple of days after landing, I got up one morning and walked out to my truck. I'll be damned if the web wasn't re-spun. She wasn't on it, but the web was there. I couldn't believe it...she had made it over 800 miles at speeds of up to 100 mph and two days later came out to build her infrastructure and get back to business. I marveled at it for a second, and noticed she had changed her web strategy slightly by connecting to the tailgate with two strands this time instead of one. It seems like she continually refines that process everytime she spins.

Flash forward three months later. I've driven that route 3 more times, back and forth, and side trips through the South. Charlotte's still hanging in there. She's become somewhat of an obsession for me.

On one of the trips, I went through one of the worst rain storms I've ever experienced driving through Birmingham. As they used to say back on the farm, "It was raining like a cow pissing on a flat rock". I actually had to pull over as my windshield wipers couldn't keep up with the torrent. The whole time I was thinking about Charlotte and if there was any way she could have avoided being washed away.

As I thought about what a storm like that must be like for a creature that small, it occured to me that it must be much like a hurricane. Swirling winds of 100 mph, pounding rain....her home being destroyed, God knows how many times. I keep wondering why she doesn't just do a spidey jump off the tailgate and go find a bush, but she keeps coming back...she just keeps re-building.

My brother-in-law and his cousin just borrowed the truck to move some stuff...I gave them this 5 minute sermon on how to gently open the tailgate and break the web so as not to harm her....they of course, think I'm crazy. When I swim I always put my trunks on a clamp in the truckbed to dry them out...now I make sure I put the trunks in an area where they won't fly off and hit her or the web. She's pretty much taken over that side to the truckbed.

Maybe I'm losing it....but the longer she survives, the better I feel.

Just wanted to thank you for the link. Much appreciated.

It's been a while since I wandered over here. What a great sequences of posts I found! I love the one below about the obnoxious dinner companion (for lack of a better word) and the timely call from an old friend. It was wonderful, but this one may be even better. I could picture you driving through B'ham in the torrent worried about Charlotte in the back and picture her rebuilding and rebuilding, despite the oddss. I don't know what species she is, but we call them "writing spiders".

Or "the myriad creatures of Polymnia". I just made that up...it doesn't make too much sense, but it's what came to mind.

Maybe she's one of these:
Golden Orb Weaver
Or possibly a Banded Argiope, but I can't see enough of the abdomen to be sure...

Lisa, the banded argiope looks like the most likely candidate but I still think it's something else. I'm gonna take it down to the Smithsonian and ask one of my friends there.

Thanks for looking it up.