In the beggining there was the Logos...in the end there is Newspeak

Time for another Zombie wake-up call.

Our wise men on the Hill in the District of Columbia recently re-defined the definition of an "enemy combatant". Previously, an enemy combatant was defined as someone who was "captured during an armed conflict".

Now an enemy combatant is defined as someone who "purposefully and materially supported hostilities against the United States."

Wow, I'm no longer scared of Al Qaeda...I'm scared of my government.

Being a New Olreanian, I've written and verbalized some rather scathing criticisms of my government in the past year. Is the 1st Amendment protected against this new definition? Am I now an enemy combatant? What is the semantic interpretation of "hostility"?

There are specific milestones which become apparent on a country's path to Fascism. One of the most important milestones is a shift in the use of language and an intent to use language to confuse the populous. Case in point, the recently branded meme "Islamofascism". The semantic construct of the word is impossible....a religion is a component of a government and a nation and hence a component of the brand of governance of "The State"....it is NOT the state itself.

Fascism is most commonly summarized by Mussolini's quote “All within the state, nothing outside the state, nothing against the state.” It is usually supplemented by a later quote he made, “Fascism should more appropriately be called Corporatism because it is a merger of state and corporate power”.

The key element is that you must start with "The State." The rise of a Fascist inferno is kindled by vehement notions of nationalism. Religion is used as a tool to manipulate the populous into a national fervor...Hitler consciously weaved Christianity and Arthurian legend to delude the German masses into a mindset of Aryan dominance. Yes that's correct, Hitler used Christianity as an impetus to create the Third Reich...as a matter of fact, without it, he would have never risen to the level of power he did. 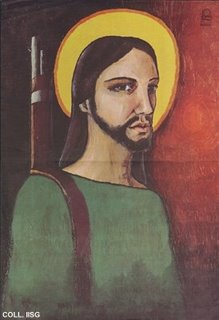 or "Judeofascism"? No...of course there isn't...none of these semantic constructs exist. There is no ubiquitous Islamic nation which constitutes a fascist state. As a matter of fact, one could merely look at the Sunni/Shiite hostility in Iraq as a clear example that Islam is not a unified state with a single direction. The borders which carve up the Middle Eastern countries quite often represent clear ideological and political differences which supercede Islam. Saudi Arabia is starkly contrasted to Iran in their political views, alliances, and most importantly in their interpretation of Islam.

Once again, there is no single "Islamic State". To suggest that Islamofascism actually exists, we would have to turn to our own country and ask "Are we Cristofascists?". Religion is a TOOL used by fascists to invoke a sense of uber-nationalism and indignancy among the nation's populous, much like Chistianity has been used in America in the past 6 years by our current administration.

One of the great guidelines we have for identifying fascism is Umberto Eco's essay on how to identify a black hat (fascist). If you have the time it is well worth the read.

Please note his reference to Orwell's construct of "Newspeak"...then flip on Fox News for about 15 minutes (if you can take that much of it). Also, look at the 14 points reflexively as an American.

As I said before, there are milestones on the dark path to Empire...we've just reached one and the words carved in the stone are these, "purposefully and materially supported hostilities against the United States."

Thank's for posting this piece from Eco's writings. I had totally forgotten about it.

You speak the truth, baby! Hell of a post! Thanks for being a Guiding Light.

I found No. 8 the most interesting, although all are fascinating (and largely true). Eight says at the end "Fascist governments are condemned to lose wars because they are constitutionally incapable of objectively evaluating the force of the enemy." I think I just saved $25 on Berstein's new book, because Eco said it all.