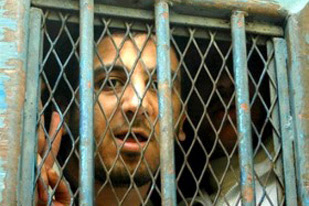 I caught this article on Aljazeera about an Egyptian blogger named Abdel Kareem Nabil Suleiman who was sentenced to four years in jail for "insulting both Islam and the Egyptian President".

I couldn't help but think of Vitty's eyes lighting up if he read this story.

In case you don't remember, Vitter recently tried to tack on an amendment to a lobbying reform bill which would classify political bloggers as lobbyists and require them to report to congress quarterly or face a potential 1 year prison sentence.

Yeah....seriously....he did. It makes me want to pull a FOX and write a news release, "Vitter sides with Islamofascists on Jailing Bloggers!"

Wow, this is some good stuff!! I totally enjoy reading your blogs daily. I never know what is going to come out of that awesome brain of yours!! By the way, Amnesty International rules!!

What's your opinion of this:

LOL...I sent Vitty Cent some Louisiana hot sauce along with a letter and on the outside of the of the envelope, I wrote "Senator Mary Landrieu rocks!!!" I can't stand him and he knows this....He turns his fax machine off on my faxes!!!!