A success, kind of

The good news is the Jeff Parish Police nabbed Ronald Martin. The bad news is they transferred him to Orleans....at least he'll be off the streets for a few months before Jordan's office let's him back him out. 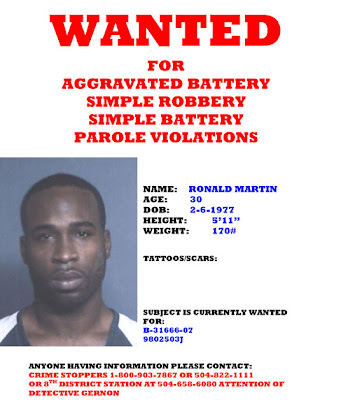 Westwego man arrested in French Quarter muggings
A 29-year-old man suspected of a series of muggings in the French Quarter was arrested Tuesday evening in Jefferson Parish, according to New Orleans police.
Ronald Martin, of Westwego, is accused of beating a couple and stealing the woman's purse late last month.
Martin was arrested Tuesday around 6:15 p.m. by Jefferson Parish Sheriff detectives in Jefferson Parish, police said. He was transported to New Orleans and charged with one count of second degree battery, one count of purse snatching and one count of simple battery.
The victims were walking in the 900 block of Gov. Nicholls Street around 1 a.m. on Feb. 28 when Martin allegedly got out of a car and struck the man several times in the face. Martin then hit the woman, took her purse and fled, police said.
The incident put the French Quarter neighborhood on edge and turned into a hot button topic last week at a community policing meeting. Police said at the meeting that Martin is also eyed in several other neighborhood muggings.
Posted by Jason Brad Berry at 3/14/2007 11:29:00 AM

"Police said at the meeting that Martin is also eyed in several other neighborhood muggings."

I don't recall them being reported. I've said it before, but we wouldn't have heard about the last mugging if that couple hadn't known people who publicized it. I don't know if the blame's with the city or the local press. The Picayune started to publicize crime reports for a while last year, but it hasn't in months. At least not anywhere I've seen them.

Yeah, great fucking point. That's a good observation, man. I think a large part of this whole problem may be a lack of infromation to the community.

It's interesting....I think i want to make a documentary on this whole problem. I think there are people with answers....but our leaders aren't listening.