Mmmmm....Peter....did you get the memo about the cover sheet for the TPS report???

And you thought the Camera Bid was a sealed deal and went to the lowest bidder...not so fast. The former bidders just received this notice from Nagin's department of purchasing:

Please be advised that the City of New Orleans withdraws any offer of award of contract and cancels the above captioned bid proposal due to the lack of a responsive bid. Public Bid Law R.S. § 38:2212 states that award be made to the lowest responsible bidder who had bid according to the specifications.

A new bid may be released for a wireless surveillance camera system in the near future.

Thank you for competing. 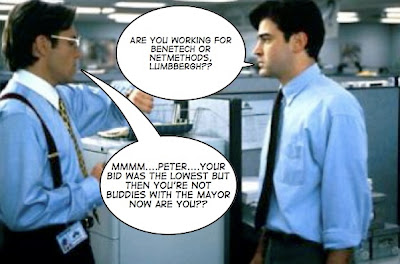 So the bid was won by the lowest bidder....but.....he forgot to put a cover sheet on his TPS (totally pointless shit) report. Nice.

The license in question is apparently a minor requirement which could be obtained rather easily. I would love to hear if the bidder was notified that this requirement was missing before the city killed the bid.

Now Nagin can re-bid it and push it back to Netmethods or even worse...issue an emergency procurement and just give the contract to Netmethods.

Welcome back! As always you are right on time. This just in. Wonder what happened to the Technology RFP that was supposed to replace Benetech/Imagine/etc.? Well, no word of an award yet but my sources say Muppet's hands are all over this one man. I should have more details soon or if anyone has any insight please share.

What's also very interesting is that the City never named a replacement for the CIO position. Word has it the interim CIO (somebody my source referred to as "AJ") is a Muffet loyalist and in line to retain the job. Get this.. Nagin gave the guy a 150K salary and he doesn't even have a bachelor's degree. This truly is the banana republic!

Keep your eyes on this one....

Had the bid been awarded or amended it is likely that there would have been a legal challenge.

You might recall the legal mess of the Convention Center Phase 4, a judge actually ruled that is the public entity attempts to accept a bid incorrectly they are obligated to ultimately award the bid to somebody.

If there is any irregularity, the safest thing to do is to reject all bids and rebid.

By the way this requirement is ivery new having benn in place only since the first of this year.

Nagin Purge Coming. . .
At least two direct reports get shown the door. . . What happenned to the Dream Team of selfless pigs that Nagin raised salaries to $150K or more. . .

Purge??.....not really gonna do much now. It's too late. The damage is irreversible.