Get down on your knees

I had a such a great conversation the other night with a friend who frequents Brazil...it inspired me to pen another short diatribe on the Yoruba diaspora.

I say "it"....while the concept may take on anthropomorphic and even anthropo-zoomorphic forms, Ashe is not bound by the flesh.

If you are one who is "aware" of Ashe....you are said to possess "Itutu". What is Itutu? Well...the Yoruba say it's almost impossible to translate it into English, but the closest thing we have is when we call someone "cool". It's a mystical coolness. The color which is associated with Itutu is always blue....for mystical reasons which only someone who possesses Itutu understands.

(I cannot define Ashe as any attempt to de-fine it would negate it's in-finite-ness.)

Enter the Gaurdian of the crossroads...Eshu Ellegbara, Exu, Eshu, Shu, Ellegua, Allegba....and in New Orleans he is known as Papa Legba. Before you can become aware of Ashe or possess Itutu, you must meet Legba at the crossroads....there is no other way. How you meet him is up to you. If you approach him with respect and awareness, your transition to Itutu will be a smooth one. If you approach him with reckless abandon and impudence...he will simply kick your ass down the wrong road. If you survive, the next time you meet him you are humbled and wiser. This process keeps going until you attain Itutu, or mystical coolness. And even then it keeps going as you are bound to forget. 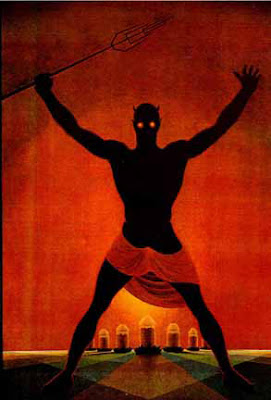 Legba is always associated with the colors Black and Red. It is said that one side of him is black and the other red, so his color changes depending on what side of the road you are standing.

You don't just meet him once. You will confront him over and over in your life and there's no getting past him. He is, in fact, the last thing you will meet...unless of course you become a zombie and rise from the dead.

It's no coincidence he lives at the crossroads...where you must make a decision. Legba is essentially a messenger....how you hear or accept the message determines your fate. He is essentially a benevolent diety....he simply demands respect.

Eshu is notorious for "tricking" or seducing women into bed , much like Pan was. He is usually depicted with phallic symbols

I had an incredible anthropology teacher when I was in college (email me and I will send you his name). He was really in to the Yoruba diaspora and had done a lot of his own research in the Mississippi Delta tracing back elements of the Yoruba tenet which had survived to the present. He had a theory which I suppose there is no way to prove, but it is definitely worth repeating.

When Eshu first met Catholic Missionaries via African slaves, they immediately knew what to call him....El Diablo. To the pious preists he was Evil with a capital E...the Devil himself. The complicated benevolent and malevolent nuances of the Yoruba Orisha were lost to the dichotomized Christian mind....everything was either good or evil...a deity can't be both.

While many African Americans converted to Christianity, many more kept the message of the motherland alive. In the personalities of the Catholic saints, they recognized traits of their own Orisha (deities). Instead of casting their Orisha aside, they simply blended them in to their new ritual. That acculturation is reflected quite beautifully in New Orleans by virtue of the "Spiritual Churches".

Jesus Christ was ripe with Itutu. One could make a good argument that Ashe and the "Holy Spirit" are one in the same.

Now, let's take a look at what I believe is the greatest gift the African diaspora gave the New World...The Blues.

We all know that Jazz was born here in New Orleans, but The Blues is said to have sprung up all over the American South. Most historians say there are three primary regions which developed their own brand: The Mississippi Delta, Texas, and the Piedmont region which stretched from Viriginia through Georgia.

The Delta, however, was the cradle.

So here's the "cool" part....when Robert Johnson went to learn about The Blues...where did he go?

The crossroads...and got down on his knees.

Common mythology would have you believe that Bob was going down to meet Ol' Scratch where he sold his soul in order to learn The Blues. Maybe...just maybe....he was going down to the crossroads to meet Papa Legba. He got down on his humble knees and Eshu bestowed Itutu on him....or Blue....The Blues. 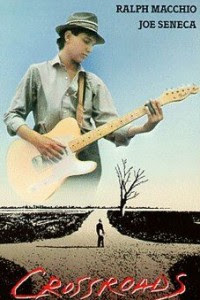 When you look at the branches of the Blues tree....from Hip-Hop to Rock to Country and even Punk....Itutu is a common thread. That mystical coolness infected America and most of us don't even know where it came from.

If you haven't read Gaiman's American Gods, I think you will get a kick out of it.

That would explain a whole lot for me. Really interesting post. I know so little about this. Thank you.

I keep coming back and re-reading this. So much of it sticks with me, mainly respect & awareness vs. recklessness and oblivion (doh), but also the trickster diety, monotheistism carried one (obvious?) step further, all manifested within that which I've been taught to call the Spirit. Of course.

So, coming back to this post I finally found my linkalong way to Robert Johnson. As it just so happens, I'm reading Barry's Rising Tide right now and best I can tell, Johnson would have been living back with his Mama in Penton, MS in the spring of 1927. I couldn't find anything online about Johnson in the flood but he would have been 16ish if his death at 27 in 1938 is correct.