I think we can safely say...

I'm not quite sure why we thought concentrating poverty in architecturally distinct, formulaic, compounds was a good idea in the first place.

The one thing unique about this city is it's interesting mix of socio-economic stratification in our closely packed neighborhoods. I'm not saying we're all peace and love but I am saying we're unique in that aspect. The projects always seemed to be an anomaly to me in that respect. I have always thought there must be a better solution to low income housing than this.

I preface this post with that sentiment before I start pontificating below.

Pelosi and Reid have apparently spotted a distant tree burning bright red in the southern forest and sounded the alarm (I'm sure Sen. Landrieu directed their attention our way). I'm not sure how this is going to play out...but it concerns me greatly because they could catapult this issue on to the national stage and we may end up being ground zero for the national debate on affordable public housing vis-a-vis racial discrimination for not only our upcoming U.S. Senate election, but the '08 Presidential election as well. (Hey Nossiter...this may be your shot at the Pulitzer, brah...start spinning)

Not to mention this whole issue would be broadcast in black and white and God knows we don't need that...cause this ain't about that. Racial bigotry was undoubtedly a primary catalyst leading up to it, but I think it's time we, as a community, finally come to the realization that unbridled capitalism and high octane privatization doesn't give two shits to Jesus what you look like....it blindly takes what it wants and blindly culls what it doesn't want. The sooner we realize that, as a community, the better off we will be. The Man ain't white....he's green...as in Greenspan...as in the color of the Federal Reserve's increasingly worthless notes...as in the color of a rotting democracy.

WhoooooK...man.....if you understand local politics you know where I'm going with this. This whole thing has the potential to be another racial wedge used as a tool for partisan political interests....locally and nationally...and while the national MSM swings the hammer, we get the cutting end of the blade.

This whole scenario could be potentially advantageous to Mary Landrieu who has a Republican target on her back as large as the one Larry Flynt has put on the Republicans'. But the fallout could end up hurting more than helping...It gives me the collywobbles fo' true.

I am a fan and supporter of Sen. Landrieu and desperately want her to return to office for another 6 years, but not at the expense of what I think is best for this city. I also worry, for her sake, that this could backfire....looking at this burning timber from binoculars in Washington, it may appear to be red, but I suspect it's burning blue as well. Please take note Blessed Mother Mary...please take note if you're thinking of fanning the flames.

On a more sarcastic and SATIRICAL level (if you're ATF please Wiki satire): 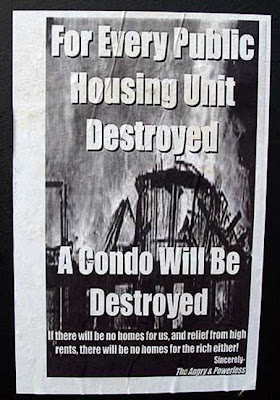 Let's get rid of both and build more real neighborhoods.

And while we're at it, for every historical home being torn down in our city per the Housing Conservation District Review Commitee, you can burn down a corporate restaurant or franchise coffee house ( - Zeas cause that shit rocks).
Posted by Jason Brad Berry at 12/15/2007 01:35:00 PM

Yeah. It's a complex, nuanced shit storm. That's fo sho. I've been glued to it all week with such mixed feelings.

Oh, yeah. Blogger's comment interface is all messed up too. My screen name link goes to my Blogger blog that I don't much use but where I'm ranting about (what else?) the new comment interface (although there are some LA focused YouTubes "parked" there too). In order to leave a link to my actual blog (where I'm behaving like a naughty child and throwing fuel on the bad holiday video fires) I have to do this: Dotcalm

With the ironic emphasis on Conservation

I'm glad to see another fresh and different opinion on this in the blogger realm. While I support the new public housing plans, I very much want to see the old ones destroyed, and I've made a pretty strong case why.