All eyes have been focused on Ike which tore SouthWest Louisiana and Houston a new bungholio. The rest of the nation, particularly the east coast, is about to get a very hard lesson on just how important the Gulf region is to the rest of the country. This storm is shaping up to be the worst possible scenario for our oil and gas infrastructure along the Louisiana/Texas coast...it ain't gonna be pretty.

But meanwhile, there is another metaphorical storm unfolding which is doing even more damage to our economy...call it Hurricane Fed. The Federal Reserve has chosen, once again, to bail out another failed financial entity...actually two...Freddie Mac and Fannie Mae...at the expense of American taxpayers. Folks, to give you an idea of just how serious this shit is becoming, we just doubled our deficit in one fell swoop....it's going to cost us trillions.

Listen to Alan Greenspan....and he ought to know, he helped create this mess.

I know this stuff isn't sexy, but it's time to start paying attention if you already haven't. That giant sucking sound on the periphery which Ross Perot once referred to has now become a deafening roar. This country is being raped by an entity which has absolutely no oversight or governance by any Federal governing body. The Federal Reserve is neither Federal nor a Reserve. They are systematically fleecing this country while we sit on our asses and wonder why gas and food prices are skyrocketing and our next door neighbors had to move in with their parents because their house was foreclosed. If you don't think the decisions the Federal Reserve is making right now affect you on a personal level....you are dead, dead wrong.

You may think they're crazy...because the MSM wants you to believe that....but voices like Ron Paul and Dennis Kucinich have been crying foul all during this campaign. We are apparently more concerned with John Edwards hair and Bristol Palin's baby daddy. I watched both party primaries in disbelief as nary a word was mentioned about the bailouts except Obama's "I don't agree with it." Perhaps he should consider telling us what he's going to fucking do about it if he's elected.

Actually, the truth is....the executive or congressional branches have little to no control over the decisions the Federal Reserve makes...the FR is autonomous to our government and doesn't answer to the American people in any way. The Central Bank, which backs the Federal Reserve consists of ten banks which are not bound by national borders and have no qualms about raping this country's wealth in order to maintain their financial sovereignty and global power. How did this happen you ask? It happened in 1913 when Woodrow Wilson committed the greatest crime ever perpetrated on the American people by signing over the wealth of this country to the European banks via the Federal Reserve Act. In essence, he essentially negated the American Revolution and put this entire country in indentured servitude and perpetually expanding debt. He even knew he was doing it:

"I am a most unhappy man. I have unwittingly ruined my country. A great industrial nation is controlled by its system of credit. Our system of credit is concentrated. The growth of the nation, therefore, and all our activities are in the hands of a few men. We have come to be one of the worst ruled, one of the most completely controlled and dominated Governments in the civilized world no longer a Government by free opinion, no longer a Government by conviction and the vote of the majority, but a Government by the opinion and duress of a small group of dominant men." -Woodrow Wilson, after signing the Federal Reserve into existence
This act was an absolute crime. The American people had no voice in the decision...it was unconstitutional to it's very core. Shortly after, the 16th amendment to the Constitution was ratified (illegally) and the Federal Income tax was imposed on the American people which goes simply to pay interest on a concocted Central Bank debt.

The Fed has acted with impunity for over a century. They just doubled our deficit and there is not a damn thing we or congress could do to stop it. They created the monstrosities, Freddie Mac and Fannie Mae, quasi-private/quasi-public companies which were operating with an unfair advantage in a private market and being traded on a very public stock exchange. Imagine what would happen if we suddenly privatized FEMA and sold shares...ok that's a little extreme but you get the point.

After 70 years of running amok, Freddie and Fannie have finally imploded and brought down their private shareholders with them....private shareholders being China and Japan. So the Fed steps in to save them at the expense of American taxpayers. Now Lehman Brothers is teetering with a market cap of 55.2 billion...just about the same amount in the FDIC coffers which are supposed to insure Lehman's depositers. Washington Mutual and Wachovia aren't far behind at 28.6 billion and 50.5 billion respectively. NONE....of these banks are legitimately solvent. And the nasty truth is the FDIC simply doesn't have the cash to cover these collapses....so the Fed is stepping in and continually bailing these banks out at our expense. It's criminal.

I was in a conversation with some folks the other day and I was trying to explain exactly what has happened to Fannie Mae and Freddie Mac and the very strange space these chimeras occupy in our economy. The best thing I could think of was the movie Beetlejuice. The main characters, Adam and Barbara, die in a car wreck but aren't quite sure if they're dead or alive....they're just stuck in some weird purgatory and burdened with the responsibility of haunting their own house.

Adam and Barbara are Freddie and Fannie, Lydia is the American taxpayer, and Beetlejuice is the Fed. 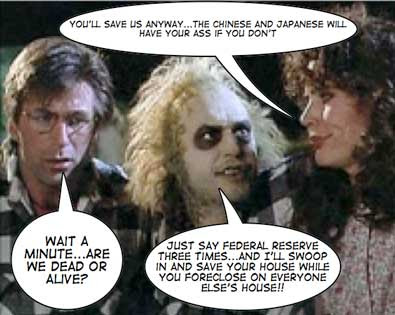 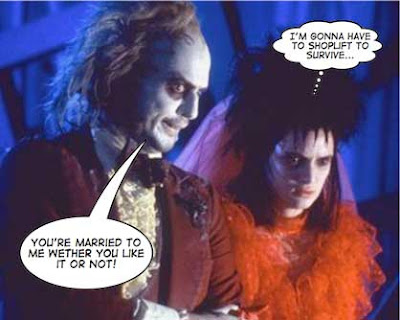