Bowling Pin's back up?

So very much to go over this week. But let's start with this hot little item:

Anthony Jones was a puppet from day one. You think the wool was pulled over City's eye's before it was discovered his education and qualifications were a sham? He was placed there as a fall guy, which is why he still has a job in City Hall to this day. 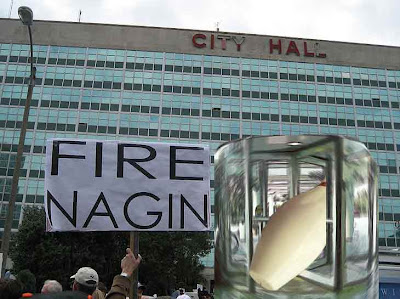 Wwwwhhhhaaaattttt??? Where is he working? I am not mad at him though. He paid the cost for lying about his education. But, how does he have a job at City Hall?

Oh, hell, this is all so dumb.

And isn't Kenya Smith coming back in some capacity soon? This must be the only workplace where you can get fired for misuing credit cards and get rehired.

One of the little green men I talk to told me that I might want to check to see if Vision IT had a relationship with MAS that stretches back to the Detroit days.

The VP for intergovernmental relations at Vision used to work for Gov. Granholm, and at Vision he was the project manager on the Comerica Park redevelopment and a number of other things that were Kwame inititives.

Interestingly, he must have worked with the architects who got the Armstrong Park projects: they had Comerica work, and work on some of the other things on VP Larry A.'s resume.

My little green man told me he'd try to find out if MAS got work for the City of Detroit, and if there was a Vision IT-MAS relationship up in NOLA North.

He wasn't happy to be speculating this way, as Vision IT has done some good things and they have a good rep.

The other thing my little green man told me was that Ceeon Quiett got her $100 000+ a year job working as Kwame's press secretary because she was the college SORORITY sister of Christine Beatty, the woman Kwame was knockin' boots with, the one he committed perjury and fired a Deputy Police Chief for.

Their affair cost the City of Detroit over $8 million dollars.

That Ceeon Quiett tidbit turned out to be true. It is nothing helpful, just salacious, though it does tend to confirm how that team Nagin assembled operates.

yeah Vern...i'm not hating on AJ...I actually feel sorry for him. I hope the guy gets a job. I just don't understand how he can be back in City Hall when he falsified a contract.

Little green man update: I'm told the same cop car set up and 311 drama you just posted about unfolded in the 'D, too.

My friend has the scent and he's going to trace that Vision and MAS relationship from the other direction. Cross your fingers.