I just have to keep posting this picture 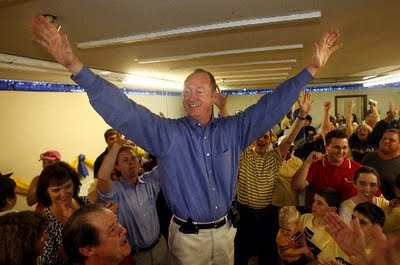 Because its so fucking amazing. What is the Pulitzer award for photojournalism?

Anyway....let's do quick summary on this story:

Federal authorities are investigating St. John the Baptist Parish President Bill Hubbard in connection with a scheme in which parish contractors helped buy a new Toyota Camry for his girlfriend last spring, several sources have confirmed.

The sources said at least three contractors — Parson & Sanderson Inc. of Harahan, Davezac Consulting Engineers of Destrehan and Pipeworks Plumbing & Demolition of Harahan — covered at least part of the payment for the vehicle in May.

Ok, so for all you folks who say follow the money....let's do that:

Davezac Consulting Engineering LLC of Destrehan was hired by the parish in July for $1 million to oversee the spending of its $29.5 million bond issue to finance part of a hurricane protection levee, make improvements to the water, roads and drainage systems in the parish and build a gym and east bank government complex.

Who is the big winner out of that trifecta? Looks like Pipeworks, huh? A 900k pull....not bad. Add the 93k in and we almost come out to a nice cool 1 million...especially if we use the Odom sliding abacus. Funny how 1 million seems to consistently pop up as a subliminal benchmark in issues of corruption.

Now, does anyone want to post odds that Hubbard is an owner in Pipeworks? Anyone? Beuller? Beuller?

His arms look like cartoon Maxwell Smart arms in that picture, elongated.