Yo, Zombies....let's grok on this dingy ding.

I've been doing my homework over the past few days to get a more holistic view of the schnizzel-wizzel going down in our City IT department. I've got a much broader picture and I hope to whip that portrait up for you in this post. Here goes....

Let's start with the now.

Boyd has apparently decided to play hard ball with MAS and is now contesting their employee's August time sheets. Sounds cool? Not so much. This isn't going to affect the upper tier management of MAS very much but it's nailing the guys/gals who were actually doing the work. It's a kind of a silly ploy to get MAS to turn over their CMS to MSF. I think it's piss and vinegar, personally. Now you know I'm no fan of Domke or MAS but this isn't the answer...MSF needs to get a CMS in place themselves. That CMS needs to be transitional to whoever gets the next contract for these services...we've gone over this and it just makes sense. This requires Mr. Boyd to demand that from MSF. I don't care if the city portal goes down for a month...let's do this right....right now. And pay people, dammit. Pay them...please.

From what I've learned...we will soon be learning a lot more thanks to a legislative audit. I think its prudent for me to wait and see what that turns up before we continue to pick this apart. Unless, of course, that takes forever....and I will continue to conduct my own audit.

But don't worry, I'm going to provide some beef jerky to chew on until that official autopsy actually happens:

1. Kim Fury Jennings is a former Dell employee. Two companies which she is associated with were contracted by the city....CBD Technology, LLC. and Registered Technology Service Consultants, LLC. 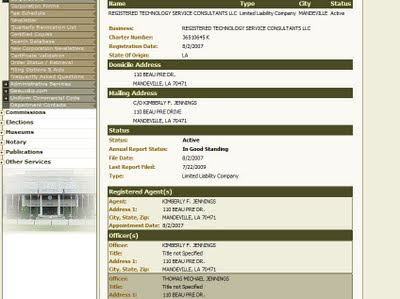 Digression: I must interject here (on myself mind you)....wtf is Registered Technology Service Consultants? What is that like Initech? Could you possibly have picked a more ambiguous name? How about Electron Transmission Dissemination and Cerebral Interpretation; Future Adaptation; What the fuck do you do, LLC. ? That's my new company and I expect to get a fat ass contract from the city just for coming up with that name.

Dell couldn't legally sell Netmethods the cameras under their existing state contract...and mind you this may extend to other Louisiana cities beyond N.O. My concern here is that a Dell employee saw the opportunity (with some help of course) to wedge themselves in between the contracting process and circumvent the intent of the law by creating these subcontracted companies.

Ouch. This has major implications in the civil suit which is gonna be a fucking show, dawg.

2. There is also some concern that Meffert may have provided a payroll loan to MAS. Now I don't think that's possible for the simple reason that Meffert may not have been the sitting CTO. But....But....did Bowling Pin execute that plan? God I hope he didn't.

3. Who does actually own the hotly debated MAS CMS? Seriously....what was the original contract?

So the view from a little higher up....the whole MAS/MSF scenario is not life or death and I may have inferred that in my previous posts....I apologize. The portal could go down for months and the city is not going to stop moving. My point in bringing this issue up is to shine a spotlight on how bad contracts, nepotism, and greed are costing us money, time and energy. It's killing us. Having a little bit more perspective on the entire contract from the top down, I can tell you that we (the city government....or what we call government) are undoubtedly our own worst enemy.

It's like hyenas fighting over a dead carcass. Instead of planting for the future....we're scavenging the remains of the day.

Here are some things you, as a citizen, need to be extremely aware of in the future:

1. Sub-contractors: And subs of subs of subs. Its a goddamn Russian doll....this process they've set up. And here's a very simple solution....we require contractors to list all subs. This has already been proposed by BSJD and other bloggers and they are spot-the-fuck-on right. I understand that Arnie Fielkow has already proposed that the city charter should be changed to require this. Absolutely....good job Arnie.

2. Performance Standards: I made this statement to HumidHaney recently and it may shock you to hear me say it but I really am a reasonable man.....I would actually overlook certain levels of corruption if the party in question was actually PERFORMING under the contract specifications. I know enough now to have lowered my expectations....but what I would at least like to see happen is that the people who get the contracts and kickbacks are ACTUALLY DOING THE FUCKING JOB.

Case in point...no not actually case in point, because I am not accusing this company of any wrongdoing or shady deals...but.....SDT. I have no reason to believe Sidney Torres is involved in any shady shit, but I do know this....he cleaned up the frikkin' Quatah's. It's been a couple years and the Quarter is still as clean as its ever been. Whatever the performance standard is for that contract...I think he's meeting it just from personal observation. Now there may be dissenting voices out there and by all means, dissent. That's what we do here.

We must incoporate some level of performance standards on the contracts we let. There's another blogger and generally smart dude who has a great idea along those lines. It's actually an idea which has been field tested in other cities and has produced some good results. I hope to get to that idea in a later post but I need to vet it out with this generally smart dude and do some more research so we have a more detailed picture to provide. On this matter, I will leave you with: coming soon.

AZ, do you have a count on how many shell companies you've found?

in what contract? I mean christ...there are so many facets of the diamond. Are you talking about MAS? I posted those subs in previous post.

As for Crime Camz....no....I don't yet know for sure how many layers there are to that onion.

and to you AZ,mad props.
without you guys doing all the supersleuth work youve been doing,we'd be just the stupider to all the croony snit that's been going on.
HELLS YEAH!

and case you missed the last few words....
THANK YOU

The civil case will be one or lost with Camsoft from what I'm hearing. Someone said that every attorney and law firm in this case could be facing legal malpractice charges by their own clients because of Camsoft.

Based on what I'm hearing Camsoft's entry into this case spells doom for the defendants. Apparently this Camsoft company has the goods on all of the defendants in the civil case. This case appears to be finished before it even started if these rumors are accurate and they have been thus far IMHO.

When I try to follow this situation, I feel like I should have a racing form in my hand.

basicaly active solutions and the southern electronics companyies stole from camsoft. in oder words they are no betta than the defendents.