The New Face of Louisiana Racism 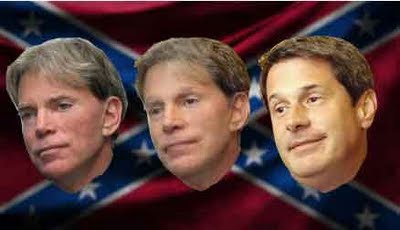 Senator David Vitter is guilty of both.

The sin of commission, frequenting multiple prostitutes while preaching family values, is sensational, but I don't think it's anywhere close to his current transgression.

Vitter has refused to comment or condemn Tangipahoa Parish Justice of the Peace, Keith Bardwell's, refusal to marry an interracial couple. The only comment he's made is that "Judges should follow the law." Right...and men who preach family values should honor their marriages, and elected leaders shouldn't break the law and hire prostitutes. Unfortunately people do stupid things and as one of the top elected leaders in the state...the top white, male, elected leader in the state....he has a responsibility to condemn idiots like Bardwell.

Instead, he has dodged the question and refuses to give us a direct answer. To me, the silence and sidestepping speaks clearly....he agrees with Bardwell. He condones Bardwell's actions.

In a period when this country is becoming a political powder keg and racist acts like this are re-surfacing more frequently...its inexcusable for a U.S. Senator not to condemn Bardwell's backwoods bigotry in his own state.

He's essentially telling the country and the world, "Racism is alive and well in Louisiana and them thar' boys are my people."

My racially and culturally mixed baby said the words "book" and "hat" for the first time in her life today.

The best way I can think of to stop hate is with love.

What gets me, let's say a voter was conservative.... why does any such voter think that Vitter is irreplaceable? There are really no other acceptable conservative standard bearers in LA? This could be said of many a conservative, moderate and liberal who fall into scandal or disreput eleswhere too, why do people always 'stand by their man' so?

Vitter is certainly casting his character in no uncertain terms, and it seems he's on a roll ...

The Vitter-Bennett amendment would require the addition of a new question to the 2010 Census inquiring about citizenship or immigration status.

Quoting Congresswoman Nydia Velazquez (NY-12), "Since the first census count in 1790, we have included citizens and non-citizens alike, and presidents from both parties have repeatedly upheld the importance of counting each and every person residing in the United States. It is ironic that my Republican colleagues repeatedly questioned whether Justice Sotomayor would adhere to the Constitution, but are now advocating for the Vitter-Bennett amendment, which raises serious constitutional questions."

Coupled with his lack of condemnation of Bardwell's actions, it would seem that he's on a not-so-subtle campaign, one that has the putrid stench of an argument (campaign?) for racial purity.

The constitution, law and basic human rights mean very little to Vitter and others of his ilk (unless they can use them in some skewed sense for monetary or ideological gain) and there is no doubt that we'll be hearing more from them.

The exquisite irony of ideologies of exclusion is that they eventually become reflexive, or exclusive unto themselves. Maybe that's what has happening within the conservative movement/s, as the right wing zealots move to "purify" their ranks, they become more and more homogeneous and, ultimately, isolated. Let's hope so.