Not sure if you caught the flash in the pan spoof of Mitch Landrieu today.

Humid City was on top of this the moment it came up, and as Loki reports, the website and video popped up, then mysteriously disappeared. The whole thing was orchestrated to make it appear that either Troy Henry or James Perry's campaign was responsible for the parody. They even went so far as to register PerryforChange.com (not used by Perry) for the contact information to the fake site. Perry's campaign immediately issued a press release stating they were not responsible for it.

Loki then published the registrar information and the company who registered the site turns out to be ComputerCC.

There is no registered agent listed in the Secretary of State's website for that name (must be a DBA), but....turns out the address for ComputerCC is the exact same address as none other than Iokon. 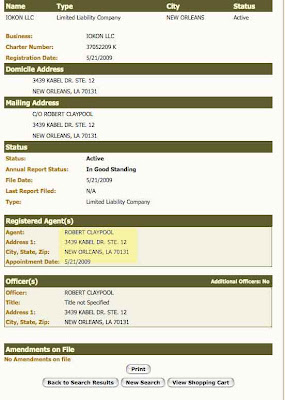 Who is Iokon? Well, look at their home page and it becomes obvious.....Georges' internet campaign company.

Doing spoofs is one thing....but doing spoofs and trying to blame it on other candidates by creating subterfuges is another. That's pretty pathetic and dishonest. Now we know what John the Caterer is capable of....same old bullshit....is that the kind of guy you want in the mayor's office? Haven't we had enough of that?

Then he didn't even have the balls to leave it up after he went through all that trouble to produce it?

Must be nice to have that kind of cash to just piss away trying to make other people look dishonest. How pathetic.

pathetic. He should stick to the golden retrievers.

Hey, we all make mistakes. What separates the good from the great (and from the bad) is how you handle those mistakes.

So, I'm just curious who made the call there to create mitchformayor.com, and whose idea it was to make it look like it came from James Perry? Did any of that come from Georges, or did you guys just think that up on your own?

More importantly, as a firm that does social media consulting, how do you respond to the active dialogue involving your brand and your client's brand that this project has created? Do you speak openly and honestly about it? Or do you say nothing and wait for it to go away and hope it doesn't get worse?

here are some of my favorite articles on the story:

and finally, just a thought, if you want to try to convince people to think you didn't have anything to do with the mitchformayor project, maybe post the story here: http://pollnola.com/

since it is pretty relevant to the mayor's race, wouldn't you agree? by not posting it, you're actually showing your cards a bit? no mention at all of it seems just a bit suspicious.

One of my favorite excerpts from that site, btw:

"it’s our combination of multiple strategies both digital and literal, that make up a genuine modern day political campaign. Dig around and learn something Mr. or Mrs. Candidate… the world is watching."

hey, you guys are online, listening, watching all the time. what say you, iokon? you seem pretty quiet on this one.

No need to guess if IOKON works for Georges:

I posted this question over on Oyster's site, but I thought I would ask here too:

Can any tech people give us an estimate on what it would cost to produce that website and YouTube video? Roughly, how much money are we talking about?

Are you kidding? Assuming you already have a decent laptop, pirate a copy of P-Shop and Flash, (though from the slickness of it, this was not done by a beginner so they prolly had the necessary software already,) get a good photo of Landrieu and park yourself at a nice little bar with web access. Your biggest cost will be your bartab. Toss in a few sheckels for the domain registration and you could probably do it for less than fifty bucks.

ANother candidate for the Legion of Douche.