You know....in the course of writing this blog I have come across some snakes in the grass whose level of depravity truly amazed me.

Meffert...is at least, human.  St. Pierre....I'm not so sure.  Aaron Bennett...is a freak with even freakier friends (Dude is a Trashanova wannabe).

They're all characters fo' true.

But then along comes a guy whose proclivity for graft and bullshit leaves my head spinning like a coked-up, midget, dancer spiraling down a greased, stripper pole...upside down.

Yes I've seen that...and we're talking Whirling Dervish on acid....please feel free to query me at our next encounter.

After conducting an extensive genealogy search on Ancestry.com....OK it was really a not-so-extensive search in my own subconscious....I found out who Bill actually descended from.


Back in June,  The Lens' reporter, Ariella Cohen, broke the story of how Lorie stiffed vendors and employees he disingenuously procured for the "Gulf Coast Summit".   It was a wonderfully, pointless soiree he held at the Riverside Hilton in New Orleans on the anniversary of the BP oil spill.

Please refer to the Yes Men's spoof of the event here.

Cohen, bless her heart, uncovered a national trail of misery flowing in Wimpy Jr's' wake.   From 10's of thousands in unpaid vendor bills to angry, uncompensated employees that Bill conned into helping him with whatever traveling road show he could dream up to exploit the ever-growing "disaster capitalist" frontier.

Bill had a history.....Ariella showed us the cliff notes.

This guy, Loiry, deserves his own chapter in Naomi Klein's next book.

Now, within the same year, Wimpy Jr. has managed to muster up yet another circus sideshow, The Keystone XL Pipeline Summit being held in Washington, D.C. on October 25.  Loiry really is amazing...he slithers in to Nawlin's, puts on a dog and pony show, stiffs multiple businesses/individuals and six months later he's setting up shop again in D.C.

Oh, did I mention The Lens recently uncovered his bankruptcy filing? 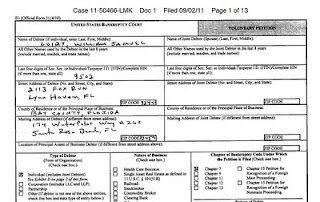 He carpetbags his way through New Orleans, leaves folks high and dry....folks who desperately needed work in the wake of BP and Katrina...then files chapter 7 to avoid having to pay them.  Now, within six months, he's doing it all over again.

Where do they make these farkin' guys?

I may just be a monkey in a tree way down in the anus of the country but thanks to the intertubes I can throw virtual turds at Wimpy Jr. from afar...and turds I gleefully throw.

Help me figure out how to hose this grifter, guys.  Any ideas?

For Loiry, this will not work. But for people who live nearby, try cutting them off.

They "earn" the money, then spend it on charities, krewes, meals, and so on. What if that dirty money just was not acceptable to anyone?

I mean, fuck you, you want to be a painter. If you took $250 000 in dirty money to fund your hobby, who cares that you like to paint, right?

Bennett and Co. show up at parties. They are friends of friends of people you know. They have their local watering holes. What if they just became unwelcome? What if no one cared what access they could provide, or what music they liked?

Scott Walker is getting booed out of restaurants in Madison, Wisconsin.

What if Bennett's people were frozen out socially for "being Bennett" or "being involved in business with Bennett"? No one can force you to be someone's friend or to take their money.

What if there were no more "He does X, but he's a nice guy, really."

I mean... Really? No, not so much. These people are not "nice" they are not "kind". They are just dirty. And ugly.

Thank you for posting this! William Loiry needs to be stopped. He is living on scamming honest people with his Summits and Forums. He needs to be exposed so he can't do his shady business any more.

Bravo! That is spot the fuck on. I can think of one specific individual I've focused on in AZ and I had a mutual acquaintance try and convince me "He's really a good guy...you just don't understand."

You know...this might be my favorite comment ever on this blog. I'm gonna bump it and rant. Thank you for this.

Loiry Scammed Me Too said...

I grow to admire you more & more each, Jason! Thank you so much for keeping the heat on Loiry. Here's something else interesting: his bankruptcy court date is mere days before this latest summit in DC. Days!! And I received my notice in August, so he's been well-aware of this filing while he's been planning yet another event. As one of his "victims" here in New Orleans, I am beyond appalled. What the hell does it take to get the law on his fraudulent ass?

William Loiry is scum. Everyone in the world needs to know about it. Pure evil. The worst of the worst.

how about balls to Bennett for weaking the "Defend New Orleans" t-shirt...

Agreed. Not sure if it was premeditated but it was a clever tactic.

If you go to his web site for the "Pipeline" event, it says the event is closed. Wonder if that's due to low registration (no refunds!), the pending bankruptcy, an attack of conscience? Note he never gives the specific location for his events, a specific agenda, list of speakers, or any of the usual info you'd expect for a legitimate conference.

According to his business card, he is the Chairman for the "United States Leadership Forum"

Yeah I know...I already posted on it a couple of weeks ago:

I too got scammed by this bum. Back in 1996 he stiffed me thousands of dollars. I sued him and it took him years to pay me back, drip by drip. I don't know how he continues to scam people. Dateline NBC, 60 Minutes, etc are you listening? Unveil this snake on a national level for all to know.

He is now the CEO of Defense Leadership Forum or United States Defense leadership forum. And owes many employees back pay and other funds