...because the arena kind of looks like a toilet anyway?

Ohhhhhhh....yeah....I know....that was really nasty.  But you know what?  I'm not going to back off until these morons realize they have a serious fucking problem instead of taking BP's hush cash and spending it on stupid shit like this.  This is a slap in the face to all the sick men, women and children along the Gulf Coast. 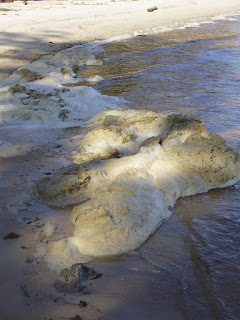 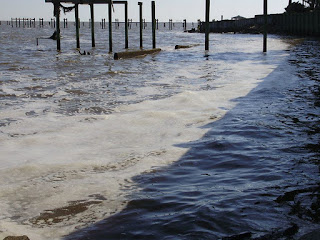 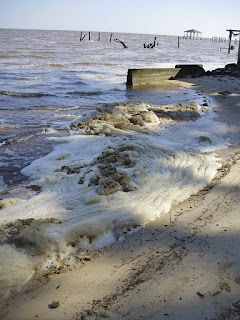 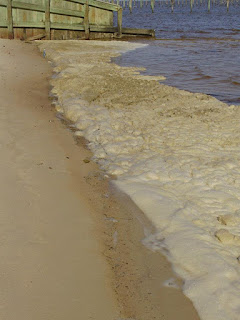 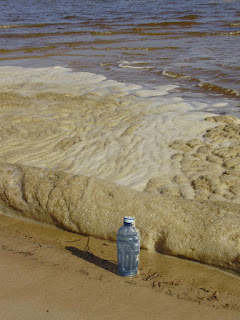 Come on in!  The water's fine! 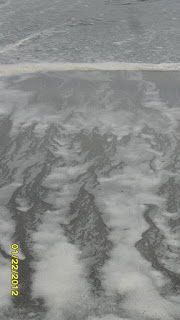 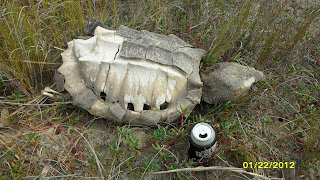 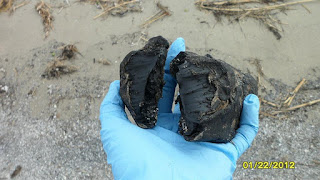 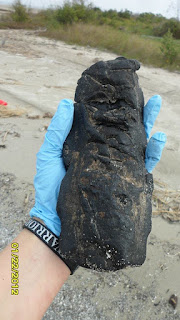 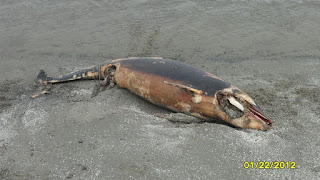 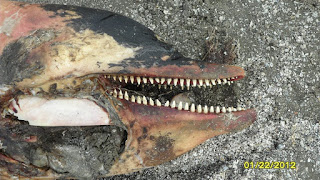 If the Louisiana Seafood Marketing Group is going to spend that amount of money on buying naming rights to the New Orleans Arena....I think we should change the Hornets mascot to the "dead dolphins".  That picture above should be plastered across the front of the arena.

The only thing that makes me sicker than these pictures are watching the actions of our own state officials who are gladly taking BP's cash and doling it out on stupid marketing shit like this to hide the truth.  This ludicrousness is beyond belief.

But go right ahead...mitigate BP's risk for them.  As it begins to backfire and the cash eventually dries up...we'll be left with a dead industry and a sick community.
Posted by Jason Brad Berry at 1/24/2012 01:10:00 PM

I'm not saying the gulf is healthy and that their are no lingering effects from the BP spill. However,I spent a significant amount of time in my youth both on Mobile bay and in Grand Isle and there were numerous times I saw conditions that looked worse then that in the 80's and 90's.
Just throwing that out there.

So an ALREADY STRESSED ecosystem was subjected to a enormous oil spill, and then had a war's worth of chemicals poured in on top, is what you're saying, first anon?

That's how I read it.

I do have a lot of trust in the Earth's ability to heal itself, but the stories coming out of coastal Alaska decades after the Exxon Valdez are not encouraging. Nor is the daily silence on this ongoing situation in most of the media.

And hey guys...I understand how emotionally charged this issue is. I don't think Anon 1 was being contentious. I think she/he was trying to sift the chaff from the wheat and I want that more than anything.

There are only a few forums, offline and online, where we're searching for the truth. This is one of those forums and let's remember that truth is our goal.

Anon 1, this is anon 2 apologizing if I was too heated.

Anon 2, this is Anon 1. I felt your response was appropriate. The gulf is a big part of everyone's way of life down here and I completely understand getting a bit heated.
The only point I was trying to make is at any point in the past 20 years you could have taken a drive down to numerous points along the gulf coast in Louisiana (or Alabama or Mississippi... but when it comes to dead sea life Louisiana always seemed markedly worse for whatever reason) and taken very similar photos to the ones shown here.
I personally feel BP did horrible damage to the Gulf and needs to be held accountable now and in the future. I just don't want people to immediately assume every dead dolphin that washes up on shore is directly related to the spill. It weakens the argument in the eyes of many people who have seen worse over the years. I still remember a trip to Cameron parish in the late 80's and there being dozens of dead dolphins and a few dead sea turtles washed up on shore... most looking very much like the ones in the photos. And the thing was everyone who lived around there was used to sights like that...

So in summary:
The gulf needs help.
BP hurt the gulf significantly and who knows how long it will really take to recover. But be careful trying to lay every dead animal or disgusting looking surf at BP's feet, it could hurt the overall argument against them.

Well I myself will only believe the necropcies results and toxicology studies on the dolphins performed by State Universities outside of the Gulf region or international marine experts like Cousteau's group. Fu*king Period and I'm known as a naive person.

The ads on TV and on the radio are creeping me out.

I know that no matter where you live, we all live within cultures, and we are all subjected or exposed to various forms of propaganda that expound the desired values of our cultures.

Some of this is not harmful, it can even be positive. Family rituals and sports team affiliations come to mind. They create or reenforce our group identities in mostly positive ways.

The religious and political stuff can be a mixed bag or mixed blessing.

I tune out or turn down my awareness of how much propaganda I am exposed to on a regular basis, but those shiny happy people on the BP Gulf Coast ads stick in my craw.

Maybe that's a good thing, but I don't like it. It makes me feel like a character in a Soviet novel. I don't like that feeling.

Can we add the advertising blitz to the oil and the chemicals when we tally up the harmful shit they dumped on the region?

Thanks as always to providing the forum, Zombie. I don't know what came of that hacking concern you had, but don't let the bastards grind you down. Would you sue them, if you knew who they were, or would you just leave them to karma, who is, reputedly, a bitch.