It looks like Wimpy Jr. stole one too many hamburgers

Willam Loiry, or as I like to call him "Wimpy, Jr.", is a holdover from a bygone era.  at the turn of the last century he would have been travelling from town to town selling snake oil without worry about getting his cover blown. 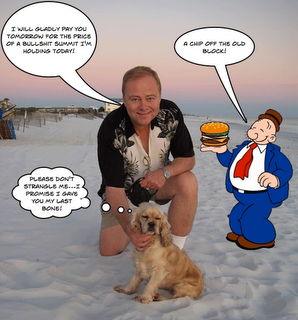 Unfortunately for Wimpy, Jr., in the modern era information travels at the speed of light and his trail of cons and carpetbagging has finally caught up to him.  He may have ripped off a number of folks in our city who desperately needed work and help at the time but New Olreanians should at least take heart in knowing that we helped cock block him from ripping off the storm ravaged victims of Hurricane Sandy in New Jersey.

A big round of applause to my friend Bec Hunter, a victim of Loiry's fleece, she took it upon herself to do the background check which led to The Lens story by Ariella Cohen that helped expose Wimpy, Jr.  This is a post from her Facebook page today:

"Oh, William Loiry. You shifty, unscrupulous little con artist, you! When I told you that you would make right on the money you owed me for work I'd done last year, you made a costly error by not taking me seriously. When

I said, "This isn't a threat, this is a promise: You have picked the wrong person to mess with," I wasn't kidding. Even though the television stations in New Orleans didn't take my information to heart as you breezed into town to "help" us after the BP catastrophe, I did not back down from bringing you to justice.

In light of your recent fallout with the New Jersey Attorney General over your continued, blatant scamming, I'm now going to share something that few are aware of: I am the whistle blower who began your demise and I am damn proud of it. By obtaining a background check on you and handing it over to The Lens, your sordid history of fraud came out into the open, and your goose began to cook. It took a long time for you to get yours, but you sure are gettin' it now.

Thank you, James Sprader and Jason Brad Berry for your help in exposing this crook and especially to Ariella Cohen for believing me and writing the article that brought his shameful behavior to the public's attention. No thanks needed for the Louisiana Attorney General's office who shrugged their shoulders and chose not to pursue this opportunistic carpetbagger. The New Jersey cavalry took care of things when you would not. And now the fun begins.

Off topic, but, WTF, Slabbed is off line?