I'm gonna say....Mrs. Peacock in the Hallway with the woody...thingy?

And it turns out I'm wrong...looks like it's the owner of the building with the video surveillance system.

Seriously, read Lamar's post above.  It should be required reading for everyone in this state.  Turns out the ultimate irony isn't that yet another Louisiana, "family values", Christo-fascist, republican got caught bird dogging...the big twist is that the guy got crucified by his own party for supporting something very "Christ-like":

“It’s about doing what’s right. You keep your people healthy, they’ll continue to work. They’ll do better,” he said. “The money’s there. As a business guy, I don’t like Gov. Jindal standing up there and trying to use political points” to argue that the state can’t afford the small fraction it would eventually have to pay to draw down billions in benefits. “It don’t take Einstein to figure out that’s a pretty darn good return on your investment.”

"I’ve been told that party leaders were aware of Congressman McAllister’s plan to continue emphasizing the need for Medicaid expansion, not just in front of Washington audiences but also in meetings throughout Louisiana. And that, more than anything, may explain why these videos were released when they were. "

In the meantime, I'm going to revive my Mardi Gras costume this year and run for McCallister's seat.  Little did I know that when I chose to be The Duck Philanderer I would be prophesying the Louisiana political scandal of the year (so far).  I'll let you know when I start the campaign ;) : 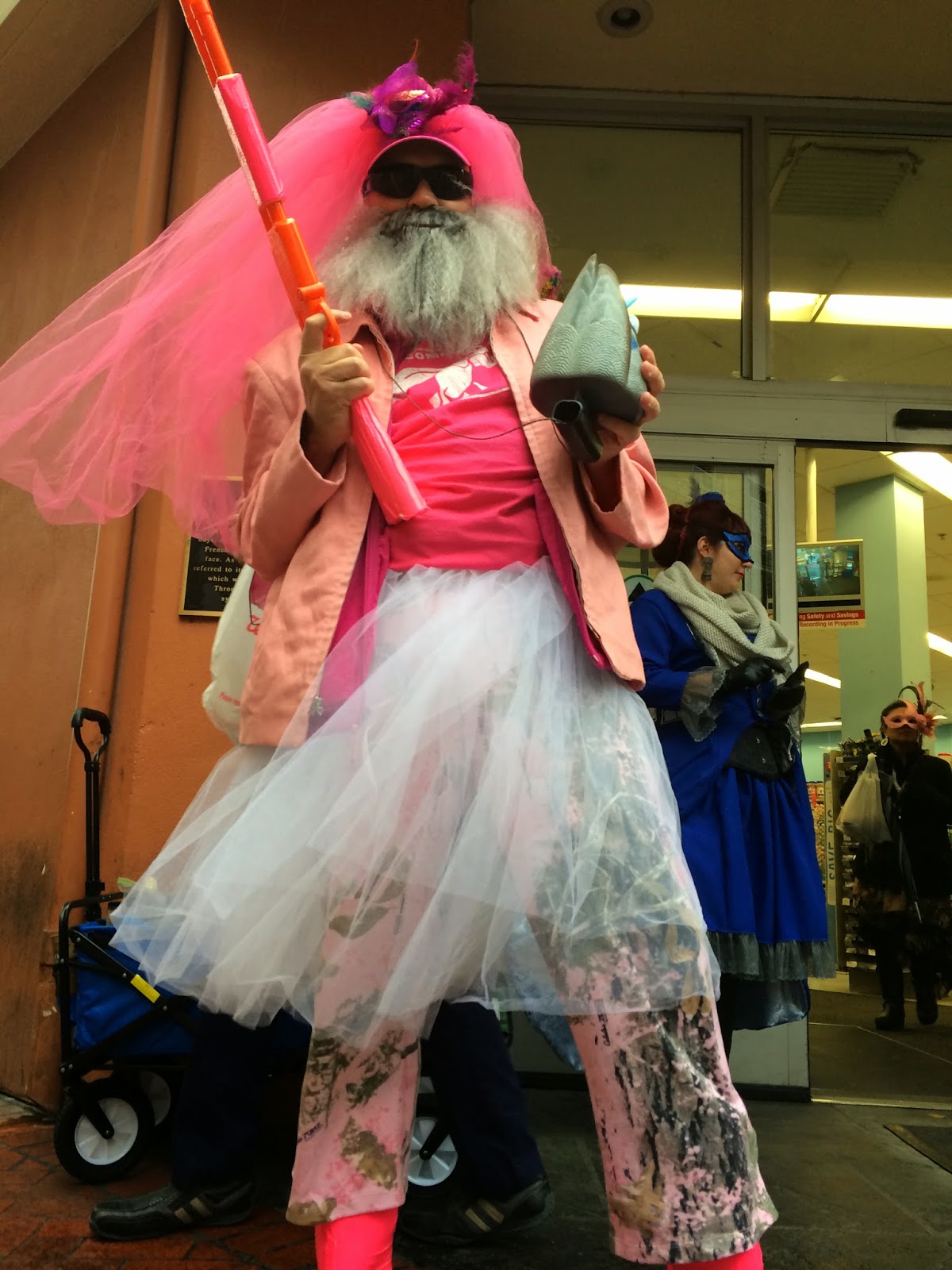 Hey...word has it McCallister's Deli is adding the Peacock Patty Melt to the menu.

It's the Peckerwood NSA!

It`s not unusual to try to make sure you`ve got something on your political friends and foes, something you can tuck in a back pocket and deploy when friend turns into enemy. It`s a nasty game, politics.

Infidelity makes me sad. I prefer it when lovers respect each other`s hearts.

I like a legal and social regime that is open to gay, straight, married, unmarried, divorced, remarried, cohabiting, NOT cohabiting but commited to one another, and everything from celibate to polyamourous, so there is no legit excuse for betraying someone who trusts you.

I`m personally more conservative than that whole long list, but those are my family values: just don`t betray someone. Dante`s lowest circle of Hell is reserved for betrayers.

Here, I think the infidelity is sad but not illegal, and the Draco Malfoy who thought to catch out others by going out of bounds himself deserves detention in the dark forest himself.

"read Lamar's post above." Challenge accepted. Very interesting, and I read the comments which said more about the Dynasty was on youtube - so I searched and sure enough, led to this:

Be sure and watch for forcible removal of a member making a motion, election of a new head, everyone turns chairs around to see new head, who then falls and breaks his hip apparently (can hear a statement by attendee), then election of new head and more force being used on new head and attendees - all while Villere continues on a meeting that most have turned their back on.

All I can do is shake my head in disgust. Keep it up AZ - we are slowly being educated.

Re: Turns out the ultimate irony isn't that yet another Louisiana, "family values", Christo-fascist, republican got caught bird dogging...the big twist is that the guy got crucified by his own party for supporting something very "Christ-like"

Well, that's not it either. "Turns out" the guy was just another run-of-the-mill jack-hole that wanted to be a politician. He did what most sleazy politicians do - say and do whatever it takes to get elected. He did that. I think you are falling victim to the same thing the voters did, by believing what he said. Just like he was obliviously not a true-believer in the wholesome values he espoused, he also did not have any core values about whether Medicaid should be expanded or not. He gambled that announcing that position would bring him the votes he needed to win, and it did. The reality is that most clinicians, whether democrat or republican, would agree that expanding Medicaid does not improve or expand actual healthcare. That and all other attempts, so far, to "reform" healthcare have failed because they do not address the fundamental issues causing the problem. Solutions are out there. They are just not being considered by those in positions of power. Like most viable solutions to problems, they will initially involve effort and work - not things that bring votes to politicians.


Kiss me, deadly: If Vance McAllister had hired a hooker, he’d be talking about Benghazi today

The first part of ensuring health has nothing to do with the way a healthcre system is structured.

HANDWASHING as a regular habit is huge.

Solid and supportive prenatal care and gentle, mother-respecting irthing options with good medical back up... THAT is the actual health care system priority that pays the biggest dividends long term.

Low birth weight babies have more heart disease and other health issues as many as fifty years later.

So much of ensuring a healthy population is really addressed in plnning meetings-- where to put the incinerator, whether to create a walkable neighbourhood with housing that has sociable front porches or a gated community to have to drive around, etc.

Farm policies, food policies, and laws about clean water are key to health. The rights of women, particularly the most vulnerable pregnant women-- young, poor, minority, non-citizen, etc.-- these are keys to community health. If things are solid for the weakest, then they will work for everyone else, too.

The health needs of military veterans is important, but the best place to start caring for these people is to look at the economic situations that made the military the best available option-- revive local manufacturing and other obs, cut your need for PTSD support and help for amputees.