This exhibit in BP's motion to remove Juneau as Claims Administrator of the Deepwater Horizon Economic Claims Center clearly shows that Juneau was representing the state against BP when he accepted his position.  He should have at least disclosed the potential conflict but not only did he hide it, he lied about it.

I went back and looked at Juneau's interview with Special Master Louis Freeh to see if Freeh asked Juneau if he had represented anyone in the BP litigation prior to accepting the position as Claims Administrator.  This interview was conducted under oath: 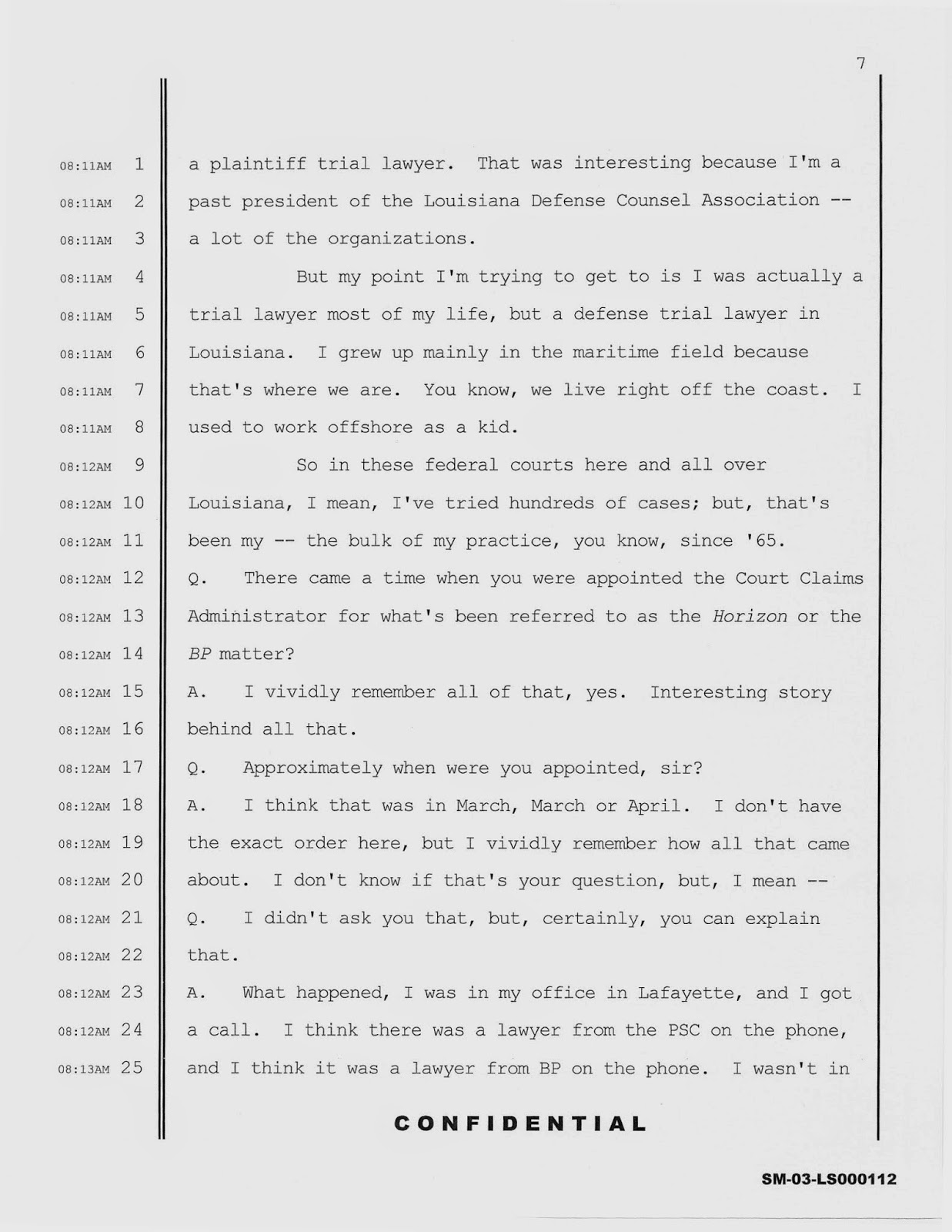 That's a bald-faced lie...we now know from the exhibit posted above.  It's also perjury because he was under oath in this interview.  And I'd like to see him play the "foggy memory card" because he prefaced the whole statement with "I vividly remember...".

BP lawyer Mark Holstein even says in the exhibit had he known of the conflict previously he would have brought it to the attention of Special Master Louis Freeh.  Well Freeh didn't even have to ask him, Juneau willingly denied having any "involvement with the spill" or having represented any claimants in the spill.

The reason this is a big deal is because Louis Freeh accused both Lionel Sutton and Christine Reitano of committing perjury when he interviewed them and suggested they be prosecuted for it, even though I don't think they did perjure themselves.  Here, Juneau clearly did so.

Louis Freeh is currently incapacitated due to injuries he suffered in a very serious automobile accident in Vermont.  Regardless of my opinion of his performance with the DHECC, I wish him a speedy recovery. 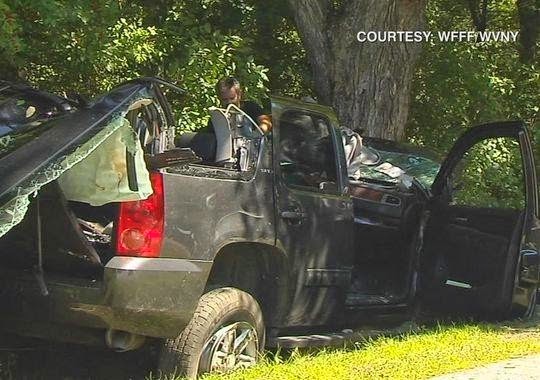 But someone within the Freeh Group should now make a statement regarding this matter of Juneau perjuring himself, no?  If this was such a serious matter regarding employees under the Claims Administrator it should be much more serious coming from the CA himself.
Posted by Jason Brad Berry at 9/04/2014 12:49:00 PM

Freeh had evidence that the CAO expedited a claim for a friend and did nothing. Why should perjury be any different?


A couple of additional minor "interesting" things appear in that Sworn Statement.

First, there's apparent disagreement between Pat Juneau (PJ) and David Duval's (DD)recollection of how DD came to be employed at the CAO. PJ says it was Magistrate Shushan who recommended DD, while DD gave a statement to Freeh saying that his dad Duval (dD) had lunch with PJ and PJ told the dD he had a job for somebody like his son.

Then, there's the sworn testimony of PJ that BP submitted a list of 3 names of candidates for the position of CEO at the CAO. PJ also testified the Plaintiffs gave him 3 names.

PJ never identifies the 3 names from the Plaintiffs, but he testifies that BP submitted the names of David Odom and Price Mounger (PM) as candidates. PJ testified he believed that PM was with "AlixPartners." PJ testifies he interviewed each and every one of the candidates.

I'm pretty sure those facts are wrong with regard to PM, and PJ might have been having a foggy moment. Beginning with the Combustion case, PJ has known and worked numerous class actions where PM was working his ass off for 1 or more class counsel or PSC member who always paid him less than he was worth. I could be totally wrong, but I can't imagine PM was working for AlixPartners or any other BP consultant.

Somewhat related: according to the LSBA membership directory, they have no records on DD, and the LADB lists him as "inactive."

"Freeh had evidence that the CAO expedited a claim for a friend and did nothing. Why should perjury be any different?"

I do believe has now been proven to have committed the exact transgressions Freeh accused both Reitano and Sutton of, expediting claims, perjury. Both have been proven on this blog. I suppose it's ok for the CA to do these things but not for underlings (even though they didn't, certainly Reitano didn't).

He constantly plays the "old man foggy memory" card but in this case that's not going to fly. It's pretty clear he went to some lengths to conceal his involvement with the state suit against BP, including lying in this interview with Freeh.

If the discovery BP is requesting is denied, it will solidify Barbier's complicity in protecting Juneau and his PSC bro's.

IF they get to do some discovery, I hope they video the depositions.

No way will this judge ever allow discovery of Juneau or the PSC.

Notice what's absent from the very broad answers he gives in response to the questions? PJ never mentions his numerous and substantive communications with Feinberg about the BP claims process. Yet, in a sort of affable "by way of background", he volunteers that he knew Feinberg before BP because they were both members of the Academy of Special Masters. If you're discussing your relevant history with Feinberg, why wouldn't you mention your direct work with the man on the BP matter?

Someone took out a huge billboard coming into the CBD. "The Truth About the BP Settlement. Com"

It should redirect to AZ!


The court has set a briefing schedule for BP's motion to remove Juneau. It stretches all the way into late-October. "No new or additional exhibits shall be included with BP's reply."

I'm guessing there won't be any discovery allowed.

Is that a surprise?

You know what's surprising? It's surprising that Barbier thinks he's somehow above it all. As if his robe will somehow hide the transgressions from the historical record.

That's sheer delusion and hubris but it's gonna make for a great fucking story.

When institutions grant someone a title, I think, quite often, they think they are somehow above reality. They think they have the final word and therefore they can manipulate the law to reinforce that reality.

Those fools...those fools...don't understand what the First Amendment is. It transcends prescient law and the zeitgeist. It stays forever...long enough for the truth to surface.

I think this whole shebang is at a pivotal moment.

Does Barbier want the truth or will he hide it at the cost of his own reputation?

It's the stuff of novels.

This will play out just like Penn State. The relationship and deals between the Board of Supervisors, the NCAA and the Freeh Group are starting to be exposed. We are a year or so behind but the same thing will happen with this Court, the PSC, Juneau and the FG.


Where are our Class Representatives who should be protecting the interests of Class Members who are not fortunate or connected enough to have their claims expedited? Why aren't they asking questions of PJ about Corps Constructors or the at-least 409 others that were expedited?

Have our Class Representatives been paid?

Is there anything in the law that would prohibit BP from obtaining voluntary sworn statements from Sutton, Reitano, Corps Constructors, etc. and supplementing their motion?

Any discovery would be useless. The judge ordered that BP cannot file any additional exhibits.

It would be useless in Barbier's court. It may come in handy if SCOTUS hears BP's appeal.


It's my non-attorney understanding the court ordered that BP couldn't submit any new or additional exhibits with its "reply brief." That's why I ask the question above about amending or supplementing the motion.

Do you think judges are inclined to stand behind their special master appointments, particularly when the parties agreed to the appointee? In this situation, PJ’s sworn testimony is that, not only did the parties agree to his appointment, but they also by-passed the process of submitting 3 names to the court for consideration.

It would seem like the court and PJ would welcome the opportunity to establish this as a "Hail Mary" and, to use PJ's word, "sanctionable." Discovery cuts both ways. What would PJ or Freeh discover on BP's computers that might vindicate the court's appointee?

I admit I may have a conflict in this. A few weeks ago, I bet my left nut that PJ knew details about the settlement before he became special master. He says in his sworn statement he knew nothing.

Some minor discovery of phone and billing records is all that's needed.

My guess is that not only did he know details before he became SM, but there was a 2 prong approach with PJ working Fienberg and members of the PSC working BP. I would bet that the damage templates PJ submitted to Fienberg and the damage models the PSC were discussing with BP had a common origin.

That's probably a very good guess on your part. It also makes me think of something I read in the hand-written attorney's note attached as an exhibit to BP's memo.

PJ, for some reason, apparently provided the names of CPA firms Bourgeois Bennett and Postlethwaite & Netterville in the interview process.

Does anyone know what Danny Clavier was doing at the DHECC? When did he start? Did he work for PJ? The CAO? The DHECC?


2 great sources provided me with information today about PJ and Danny Clavier.

Thanks to 1 source, I now have an idea about the timing and backgound of Clavier's work at the DHECC. It appears he was there from the start.

Now the other source definitively puts PJ and Clavier meeting together on July 21, 2011 - the effective date PJ cancelled his contract to advise and counsel the Louisiana Oil Spill Coordinator's Office on the claims process and protocol associated with the Deepwater Horizon event.

Source #2 also confirmed PJ had communictaions with Calvin Fayard and Danny Clavier during 2011, and Clavier did not physically retire from Bourgeois Bennett until sometime in October 2011 even though the effective date of his retirement was April 30, 2011. The precise nature of all those communications is unknown.

Do you know if Clavier retained a financial interest in BB after he retired?

Even if the judge does not allow discovery, couldn't BP get PJ's billing records to the state through a FOIA request? I wonder if he billed for consultations with certain members of the PSC and BB.

Did you see this about Freeh?!

Yeah I saw it....looks like someone's been reading the blog, huh?

"Even if the judge does not allow discovery, couldn't BP get PJ's billing records to the state through a FOIA request?"

A Louisiana public record request to the LOSCO for the billing records does the job. I received copies today of those records with some redaction. I'm sending them to Jason, but their might be some technical difficulties with publishing them.