It's been about six months since I posted a story about how the 1400 block of LaSalle Street had been ILLEGALLY appropriated by the Louisiana Stadium & Exposition District to be incorporated in to the footprint of Champions Square.

WWL-TV picked up the story and confirmed that there was no legal agreement for the street to be appropriated by the LSED and the City had received absolutely no compensation for it. (I confirmed that as well through a public records request)

There was a follow-up story where the chairman of the LSED, Kyle France, said he had contacted Mayor Landrieu and they were going to "work it out":

“I’ve been in contact with the governor and the mayor of New Orleans,” said Kyle France, chairman of the LSED. “I spoke to some of the key folks today, right before the LSED board meeting, so I am confident that something will be worked out here pretty soon.”

SMG President, Doug Thornton, the company that manages Champions Square chimed in that the reason why no official agreement had been struck was because he was simply looking out for "Louisiana" taxpayers:


"Doug Thornton, who operates Champions Square for the LSED’s management company SMG, said LSED was cut out of the negotiations at that point. The LSED, otherwise known as the Superdome Commission, had refused to pay the city’s asking price of $3.3 million in 2011 because they didn’t agree with the valuation and because the state was developing the street for a public benefit.

Thornton said he understood that the city needs to be compensated, but also said his team had to protect the state’s public money and couldn’t overpay for the lease

“This is not a matter of anyone's fault,” Thornton said. “There's just been discussion about how to move forward and in the meantime, there's been a lot of commerce generated there and a lot of public good.”

Ok.  No one is to blame for millions of dollars that Should have been pumped in to city coffers that Could have gone to....I don't know...maintain pumps?

In fact, if I'm not mistaken, former Executive Director of New Orleans Sewerage and Water Board, Cedric Grant, landed a nice little contract for Thornton and SMH while he served as the Chief Administrative Officer for Ascension Parish.

Grant emerged in Ascension Parish after he was "let go" from his previous job with the state as a Deputy Secretary of the Department of Transportation and Development by the Jindal Administration.

But shortly after the SMG contract, Grant magically hit the jackpot with the Landrieu administration. He was scooped up as a Deputy Mayor in 2010 then ascended to the Executive Director of the S&WB only after Mayor Landrieu somehow decided that over 60 applicants couldn't match Cedric's prowess.

The State Board of Ethics even filed a complaint that:

"He couldn't take the position due to a two-year ban on public employees doing business with their former agency after leaving office."


State Ethics Board member Peppi Bruneau raised hell about it but Mayor Landrieu must have really had a hard on to get Cedric in that position.  He pressured State Legislators to "make an exception" for Grant in respect to the ethics complaint.

Of course Landrieu got the "exception".

I'm sure all of this had nothing to do with the contract Grant bestowed to SMG.
You've heard of the Peter Principle?  Where corporate structures often award incompetence?  Where nepotism and power often lead to unqualified candidates moving up the corporate hierarchy to positions of critical management simply because...they failed forward?

Guess what?  There is still no contract between the LSED and the City for the use of the 1400 block of LaSalle.  I just confirmed that through a public records request this week. 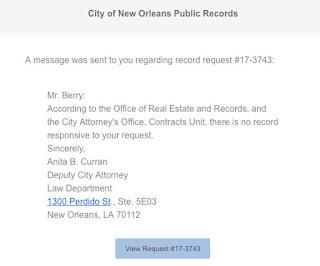 I wanted to wait until the first Saints first home game to find out if they were actually going to resolve the issue before 10's of thousands of people poured across the property so I could get a clear picture of how Thornton thinks the 1400 block of LaSalle is "overvalued".

I, myself, slogged across that public street with thousands of other people that day we got our ass kicked by the Patriots.

Clearly, this street is not "public".  Not even close.  Barriers on both ends with police checking bags....it ain't public.  It is now a permanent part of the Champions Square footprint.

The same guy that was probably responsible for "backrooming" an incompetent Cedric Grant in to a position which ended up drowning parts of the city during the past flood was publicly informed that his entity, the LSED/SMH, owed the City of New Orleans millions of dollars, back in April.

The LSED and the City told WWL-TV that they were going to resolve the issue, stating:  "It's in the works."

The City of New Orleans has lost millions that could have gone to...I don't know...cleaning out catch basins?