The world isn't flat, but Thom Friedman's mind may be

I spent two weeks in Dehi, India in May, then traveled to Dubai, UAE for about 5 days.

Before leaving, I made it a point to read Thomas Friedman's book, "The World is Flat". I've read a lot of Friedman and find that I agree with the bulk of his theories, which mostly revolve around Globalization and the great promise of a "Global Free Market".

I also read it because it seemed to be the most oft cited piece of literature by the New Orleans Mayoral candidates from Rob Couhig to Mitch Landrieu.

The book was good, especially considering I am a living example of what TF refers to as "roundsourcing". He makes some incredible observations about the cultural background of India and their inclination towards mathematics and engineering. The book paints the picture that in the new "knowledge based economy", Indian's penchant for mathematics combined with the sheer force of population will prove a highly formidable economic engine in the emerging global economy.

He then goes on to juxtapose "India Rising" with "America Declining" based on our lack of standards towards education, in particular mathematics and science...the elements which are powering the economy of Globalization.

Essentially, Friedman believes that a global free market is a potential panacea for world peace and prosperity.

It's inevitable...but i don't believe it will be a panacea.

Friedman ends "The World is Flat" with a rather curious observation about the internet. He first praises the internet as a catalyst for this emerging world economy, which in a previous book, "The Lexus and the Olive Tree", he credited with birthing what he called "The Electronic Herd".

The Electronic Herd is a marketplace, per internet, which moves without borders or a sense of time. It invests in international markets and cares not about national boundaries or market hype....it is an efficient, logical force which equalizes markets only on the basis of the viablility of economic gain thereby forcing countries to be honest, capitalistic, democracies. This concept fits nicely into his vision of a single, global economy. This world economy, according to Friedman, will in turn bring us closer to world peace and stability.

In "The World is Flat", he has a more sinister view of the net....he warns that while it holds great promise, it also poses great risk. Of course he mentions the power of the net to connect terrorist plots and wreak havoc on the civilzed world.

However it occured to me that perhaps TF's anxiety of the net is brought on by another factor. What happens if the people of the planet start communicating with each other outside the normal government and corporate regulated channels of communication? What if they start to draw the conclusion that capitalism and a global free market aren't actually beneficial to them? What if they start to realize they don't have to live in debt their whole life? What if they realize America's strategy since WWII has been to sucker "undeveloped" countries into taking massive loans to pay "Anglo-Corp" to build "infrastructure" in their country in order to bring them into the global free market.

The cost is putting them into such an enormous debt that they will never be able to pull themselves out of it, hence making them privy to American demands.

That is exactly what Enron did to India, before they disintegrated. Funny how TF never mentioned that in his praise for India's acceptance of the free market doctrine. India signed a 3 billion dollar contract with Enron in 1992 for a natural gas power plant in Dahbol to produce badly needed electricity for the country. It's 2006 and guess how many megawatts of electricity the plant is generating? 0000.0000 and the country defaulted on the 30 + million dollar/month loan payments in 2000.

In a previous book, Friedman proposed what he called the "Golden Arches Theory". Basically it stated that any country which moves into the free market/capitalist doctrine, ends up moving away from warfaring methods of conflict resolution and moves towards peaceful, diplomatic methods to resolve potential conflict.

How to tell if the country is a part of the free market? Look for McDonalds...the Golden Arches. According to TF, when people get the basic luxuries of a capitalist culture, such as a trans-fat soaked Big Mac or Filet o' Fish, they stop wanting to fight and would rather make more money so they can eat more McDonalds.

I'm not shitting, this is the theory. 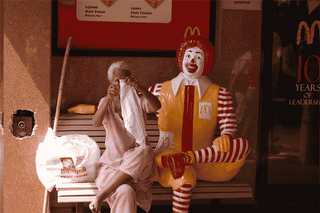 An elderly, beggar woman in New Delhi takes a load off next to a compassionate clown

This is the bone I have to pick with Friedman. I think he makes some incredible observations about globalization and it's effect on human beings and their culture. But rarely does he flip the equation....what about human beings and culture's effect on globalization...what if people decide they don't like McDonald's...maybe they decide their way of life was better before they got a McDonalds. In other words, what happens if the rest of the planet doesn't buy that the "world is better off in a capitalist environment".

Shortly after reading TWIF, I picked up a copy of John Perkin's "Confessions of an Economic Hitman". What a great antitheses to Friedman's perception of the world.

Perkin's book is a first person account of his role in manipulating "underdeveloped" countries for American profit and control of their natural resources. While a I got a little tired of Perkin's overwhelming sense of guilt, the book really spells out the horrible acts America has perpetrated on other countries in order to maintain our ever increasing pursuit of capital.

It's scary stuff...really. We have most likely assissinated at least 3 Latin American presidents in the past 4 decades, including Panama's Omar Torrijos and Ecaudor's Jaime Roldas, in order to replace them with puppet leaders who are sympathetic to American interests...men such as the brutal despot, Augusto Pinochet, in Chile and other despots in the Middle East from Iran's tyrannical Shah, Mohammad Reza Pahlav to Saddam Hussein in Iraq. As long as they were helping to lubricate the wheels of American capitalism, we conveniently ignored these dictators' human rights violations.

So the point of the post is that I would highly recommend reading these two books back to back. Read Friedman first, then read Perkins.

Globalization is not a new phenomenon, it's been evolving since Mawg of the Bear Clan traded furs for flints with Onk of the Mountain Clan. Mawg's new flints undoubtedly ended up between the ribs of an "underdeveloped" neighboring tribe member.

The rosy picture Friedman paints of Globablization in "The World is Flat" becomes somewhat of a fairy tale after reading Perkins, or at least it did for me. Would love to hear anyone else's take on the books.
Posted by Jason Brad Berry at 8/19/2006 10:06:00 PM

Check out Matt Taibbi's review of The World is Flat. It is not to be missed.

fuckin eh'...that review is right on. A little too much venom, but right on.

The one thing I forgot to bring up about the Golden arches theory is that he conveniently leaves the country that invented McDonalds out of the theory.

McD's was founded in 54 right after America was wrapping up the Korean War. We went on to Vietnam, Gulf War 1, Gulf War 2....Panama invasion is potential qualifier...and hell, let's throw in the War on Drugs as the special sauce.

Let's also include the British Faulkland Islands excursion, as I'm sure the Brits were feasting on Filet o' Fish while watching the RAF blow the hell out of Argentine warships on the telly.

Funny how he excluded those incidencts of conflict resolution when formulating the Golden Arches theory.

i keep thinking of a line in Perkins' book, which he learned from the Suar tribe in Ecuador, and wrote a separate book about - "the world is as you dream it". what kind of world do we really want for ourselves and our children? what kind of new orleans do we want?

i think the biggest challenge here is getting everyone to agree on the same dream. but it is inspiring to think that change is within our reach and possible - if we can dream it. we just need some serious dreamers.

I may be mistaken here, but I thought the golden arches theory was that two countries that both had McDonalds wouldn't go to war with each other. The idea being that each country has developed to a point where they look toward peaceful, democratic, and economically manipulated means of resolving their differences. The corollary to this theory would be that a McDonald country is left with violence as an only option when dealing with non-McDonalds developed countries.
Either way, I don't buy it. International government interactions are largely about the have's communicating with each other, and rarely has anything to do with the dispossessed. They're just caught in the crossfire.

I think Gringo was on the right track with their comment. Whether or not the theory holds up in the harsh light of empirical evidence is debatable, but I think Friedman's point is that countries with a McDonalds are so tied up in the 'global supply chain' that the disincentives to go to war outweigh the positives. As opposed to simply wanting to get fat on fast food. He revises this in "The World Is Flat" to the "Dell Supply Chain World Peace" theory, which he hypothesises is so complex and involved that countries can't risk damaging their place in the chain by going to war.

I think your review was good; I however chose to interpret the book in a more hypothetical light. A perfectly competitive, Adam Smith-style global free market of the sort Friedman suggests could possibly function in a world where the population is educated and empowered, where there is universal health care, a perfectly flexible labour force and corruption is routed out and exposed (but how likely is this?) I too have read J Perkins' book, and whereas Friedman preaches an ideal, Perkins exposes how this ideal has been twisted and highjacked by corrupted, selfish groups and individuals.