A Story of Ogun 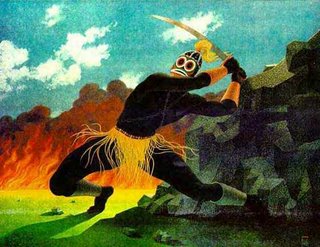 In case I haven't mentioned it...I'm extremely fascinated with Yoruba Cosmology and it's diaspora in the Western Hemisphere: Voudun, Macumba, Santeria, Candomble', etc. I am by no means an expert or scholar, but the more I learn about the Yoruba tenet and pantheon, the more fascinated I become.

It should be noted that the religion is an oral tradition...there is no written word or "Bible" which defines the parameters of the religion. Therefore, there are many branches to the Yoruba tree of knowledge. There are parables and stories which have been passed down orally and of course with each passing the stories have been embellished or altered by the storyteller. There is no book or resource one can refer to that provides the "official" story.

But as with all myth, the basic elments and motif of the stories are what really matters...not the particulars. This is one intepretation of the deity Ogun and how he gained a seat among the Yoruba pantheon.

Ogun was a blacksmith...and a damn good one. He was a master of iron who created the finest crafted tools and weapons not only in his village, but in all the land.

Ogun was also a recluse. His blacksmith shop was located at the edge of the forest, on the outskirts of his village. His great talent was also a curse for Ogun. He loved nature but the magnificent tools he created were always used to destroy it. He could not deny his calling, but he always kept one foot in the forest. He was truly at odds with his genius and his identity...a scientist's mind with a Luddite's heart.

The elder men in his village were constantly nagging Ogun to forge an arsenal....one of superior weapons. Wary of their intentions, Ogun denied them time after time. But the elders were persitent, and convinced Ogun that they merely wanted the weapons as a deterrent to prevent the neighboring village from attacking them. They twisted their words and intentions to convince Ogun that by creating these superior weapons, he would be ensuring a peaceful existence between the villages.

Ogun conceded and built a series of weapons the likes of which had never been seen. He then turned the weapons over to the village elders...all but one...one weapon which was superior to all the rest. This one he kept hidden in his blacksmith shop for fear that this weapon was too deadly for any man to weild.

You can guess what happens next....riding high on the testosterone rush of having such superior technology, the elders stormed the neighboring village and slaughtered every man, woman, and child, leaving nothing behind.

They then returned to their village, threw a massive hoedown and got drunk as skunks.

Upon receiving the news of what the elders had done, Ogun went into an uncontrollable rage. He grabbed his ultra-weapon and stormed the village in a blind fury. It was a blood bath....he left nothing in his wrath.

Coming out of his haze and realizing what he had done, his remorse overcame him and he turned the blade on himself. For this he became Orisha (immortal, or a deity).

Being a master of metal, in modern times Ogun has become the "God of Techonology" in general. Cars, computers, planes...anything with metal is under his dominion. It's a pretty awesome metaphor that shows no matter how far technology is refined to create order...it cannot stop the process of entropy and destruction. More often than not...it accelerates it. Ogun's quest for perfect order, by altering matter, led to total destruction....including his own.

Surely, Oppenheimer wrestled with Ogun's torment. With an increasing number of tribes gaining access to Oppenheimer's toy, it is just a matter of time until the weapon is weilded.

America's drunken elders may very well be the first to do so. A drunken Cheney accidentally shot one of his friends....it's not a far stretch to imagine a semi-sober Bush lighting up Iran...or a bat-shit-insane Kim Jong il lashing out at Japan.

I would like to think that as a collective consciousness, the human tribe will one day transcend the mistakes of the past. Ironically enough, I think technology is the only way to accomplish this.

The internet is the first "global neural network". I believe it is the ultimate succession of human technological endeavor. The story of Ogun and the apprehension of Oppenheimer can now be cataloged and dispersed to every tribe on the planet....or at least the ones that are threatening it.

You were right. I did like that. Having had some experience with invention (http://www.dotcalm.blog-city.com/peter_drucker_dies.htm), albeit, not quite so explosive or dramatic, I understand this story.

Of course, you speak a great truth when you suggest that we are newly experiencing a "global neural network". What a perfectly precise way to put it. I believe that it is the most important revolution yet, perhaps excepting that which followed the printing press, and it seems to me that this time there is a chance that technology will advance good over evil, and that it will become difficult for despotic leaders (even our own) to survive over time on a planet where geeks in every corner of the globe can unite in community and advance truth.

Meaning no disrespect for the importance of what you normally do here (for it is generally astonishing), this has been an interesting and enlightening variation from your regular programming. Thanks.

Thanks for the last two posts. Thoughtful as always.

I have thought alot about your description of standing in the Enola Gay. I can't imagine standing there. If asked, it would be on my top ten list of "places I never want to find myself in."

Your story of Ogun was the perfect second part. I have been past Hanford many times, and always, always was stunned by the bleakness and the "absence" of life there. I always felt that everyone should be required to see it before they were allowed to graduate from high school or vote.

I have been busily looking into Ayezan, and am finding, as I found when I spent nearly ten yrs on reservations in the Southwest that there are several different versions of any given story. I loved the way you wrote the Ogun story.