Before you throw the parade maybe you should know who you just bombed....General Scheisskopf 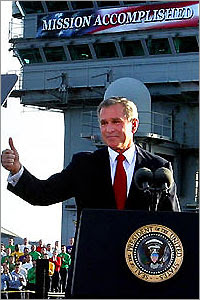 I"ve been doing a lot of reading, lately.

I just finished Reza Aslan's, "No God, but God", which is a brief synopsis of the history of Islam. I wanted to understand a little bit more about the Sunni/Shiite conflict. Turns out it's a tribal conflict more than an ideological one.

Essentially there was a schism in the newly birthed religion immediately following The Prophet's death. A power struggle ensued and two of Muhammad's closest acquaintances...his youngest and most beloved wife, Aisha...and his son-in-law, Ali...didn't get along that well.

Aisha held a major grudge against Ali, for a little incident which occured while Muhammad was still alive. Referred to as "The Affair of the Necklace" (the necklace isn't really important so just ignore that), Aisha was "misplaced" by a caravan raiding party of Muhammed's during a raid. The raiding party freaked out when they realized what had happened....they lost The Prophet's wife....doh!

Fortunately for Aisha, a childhood male friend, Safwan, chanced upon her in the desert. She was forbidden to speak to any male unless in the presence of her husband. After what I assume was an extended moment of uncomfortable silence, Safwan recognized the direness of her predicament and silently took her back to her caravan. This caused a number of rumors to swirl that she had run off with Safwan and was disloyal to Muhammad. There was a call for The Prophet to divorce her for the alleged infidelity. She vehemently denied it. Muhammad was distraught, as he loved Aisha very much and wanted to believe her. However....and here's the rub....when asked about the matter, Ali replied that it was certainly within The Prophet's right to divorce her. He didn't say he should divorce her...he just said he had the right. Nonetheless, that really miffed Aisha.

After The Prophet's death, there was a lot of confusion as to who would take over the duties of "leading" the Islamic movement. Ali was passed over for this role no less than 4 times, but was finally chosen to take on the role. There was a clear power struggle between Aisha's clan and Ali's. This split evolved into the Sunni's/Aisha's legacy and the Shiites or Shi'a (of Ali)/Ali's legacy.

In the modern world, the majority of the Arab world is Sunni (- Bahrain and Yemen) while Iran is mostly composed of Shiites. While there are some ideological differences, the cultural differences between the two sects are more distinctive than philosophical. The heart of Sunni Islam is defined in Saudi Arabia. The heart of the Shi'a is defined in Iran.

While most American's think the Middle East is one big desert of turban wearing, veil donning, Arabs...this is certianly not the case.

Bush admitted that when we launched the Iraq invasion, he had no idea there were Sunnis and Shiites...I'm certain he's aware of it now.

I am most certain that Cheney is aware of it. He just traveled to Sunni Saudi Arabia to get bitch slapped by Saudi King Abdullah who basically told him if we pull out of Iraq...he's going in, which will most likely lead to an all out bomb slinging fiasco between Iran and the rest of the Middle East: Jihad∞.

It's funny (not ha ha) how fucked up our foreign policy can get when we rush into a campaign and don't consider cultural factors...or for that matter, fail to have any clue of cultural factors. BushCo. only viewed this "occupation" as an economic, and if you want to buy it, ideologic (spreading democracy...yada yada) campaign.

Man, have they screwed the pooch on this one.

The MSM keeps throwing around "Civil War" as the looming threat. The threat is much larger than that. This is a potential internal religious war among the second largest on the planet.

So after garnering a better understanding of the situation, I now understand that it's impossible for us to leave Iraq. We never should have gone in the first place, but we did and we fucked it up...or as Bill Maher said "We knocked Iraq up and now we've got to raise the baby". It's a great analogy because this could take about 18 years.

I"m really worried about the democrats (and I am one) push to get us out...I'm beginning to wonder if we truly understand how perilous the situation is right now. Believe it or not, I think BushCo. may actually be right about this...can't believe I just said that. But seriously, if we pull out of there now or even in the next 2 years without some major efforts towards stabilization, we may end up in a full scale Sunni v. Shiite global nightmare.
Posted by Jason Brad Berry at 12/14/2006 01:18:00 AM

To think that so many millions of people have been killed and the world stands at the brink of nuclear devastation because of a crappy family rivalry. We have advanced very little from savagery, if at all.

Amen....You know what really pisses me off, is that I truly believe if the Bush administration would just come clean with the American public instead of continually feeding us bullshit...we would actually support him. If he would just 1. Take responsibility for the cluster fuck 2. Explain to us why we can't just pull out now and how the whole region could collapse into chaos if we left.....I think even most democrats would understand why we have to stabilize this at all costs.

Unfortunately the arrogant bastards just wave Old Glory in our face and assume were stupid enough to blindly follow them....but then again, I guess we were that stupid.

Great post, and excellent history label. I do think that there is a small group of people who were against the war to begin with who now believe it would be disastrous to leave the mess we've made. I don't pretend to know the answers. Thank you for continuing to pose the questions.

not a solution but i hope one of those protesters left a big pile of shite on nagins doorstep sat.

Though a Sunni/Shi'a war could be a nightmare for the world (short term, Historically speaking), it would also be a fuse that will light inter-sectarian wars within the followers of the cross.

The 21st Century could prove to be a cleansing time of two of the greatest causes of destruction of Human life in all of History.

Now all we have to do is to "eat the rich", and then we can "groove on the rubble" (Jerry Rubin).