I happened to chance across this Ad from the early 70's: 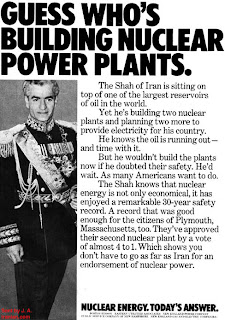 Rich....huh? The Shah, Mohammad Reza Pahlavi, was a brutal motherfucker who easily rivaled Hussein. He was the quintessential "puppet dictator" and his human rights violations were conveniently overlooked by the U.S. and the U.K. in return for ensuring our interests in Iran....much like Pinochet in Argentina, Noriega in Panama, and Hussein in Iraq.

The U.N. just voted to impose economic sanctions on Iran after they flatly denied to cease their uranium enrichment efforts.

Iran's system of government is called a "Theocratic Republic". While the Supreme Leader, Ayatollah Khamanei, is considered the Commander-in-Cheif, he is, for the most part, a co-executive figure along with the democratically elected president, Mahmoud Ahmadinejad.

Theocratic Republic...sounds awfully familiar to the vision America's evangelical movement has for own country, does it not?

So forty years ago, under the rule of a tyrannical monarch, it was perfectly fine for Iran to pursue a nuclear program. Now, when the country is closer to a democracy than it's ever been...it's unacceptable.

Meanwhile, the case is methodically being built to launch a pre-emptive attack against Iran. I have a sinking feeling this is a forgone conclusion....it's just a matter of time.
Posted by Jason Brad Berry at 12/24/2006 01:15:00 AM

If you want to fight someone you find a way.

"You just look at my woman?"

"No. I was looking at the jukebox."

"No. I don't think so. I think you were looking at my woman."

"No. Really. I was looking at the jukebox."

EXACTLY like every conflict in Latin America...Uncle Sam knows best my ass...

The qualifier in that scenario is the guy has to be good looking. If he's a fat ugly dude it's ok. So the simile on the world stage is that the good looking guys have oil, the fat ugly guys don't.

exactly exactly....and we're force fed propaganda to make us believe Chavez, Castro, etc. are despotic nuts because they sought independence from a very real oppressor...US (oohh double entendre). I'm not advoacting either man, but the average American's knowledge of our history with Central and South America is a horrible void.