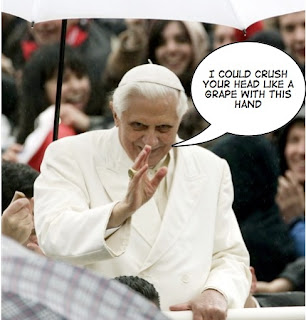 Is it just me, or is Benedict XVI the creepiest looking Pope ever? 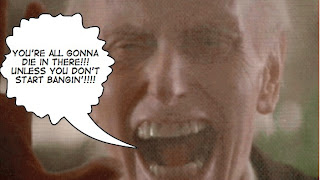 He reminds me of that guy in Poltergeist 2.

It would seem the Vatican has a pressing concern at hand. Benedict XVI recently chastized Europeans for not pumping out enough babies. His Emminence warned Europe, about the effects of their decreasing population growth rates "..."besides putting economic growth at risk, can also cause enormous difficulties for social cohesion, and, above all, favor dangerous individualism, careless about the consequences for the future."

The message seems to be, if you don't get knocked up, you're threatening not just Christianity...but Capitalism and Conformity....the holy trinity of honkyness.

On the surface, the message seems pretty cut and dry...but then he goes on, "various chapters of the European project have been written without taking into adequate consideration the expectations of the citizens."

"You cannot think of constructing a common European 'house,' neglecting the very identity of the peoples of our continent,"

Kramer should have the Vatican edit his stand up acts.

Scratch the veneer off those comments and you'll find the Pontif's real fear is that the wood frame of his "European House" has become termite infested. The metaphorical termites his Holiness fears? Muslims.

Islam is the fastest growing religion in Europe, mostly due to a flux of Muslim immigrants into the region over the past several decades, but also due to an increase in birth rates. France is the most notable country which has seen a huge influx of Islamic immigrants...nearly 10% of it's population is now Muslim. We've already seen bloodshed in the past decade in Bosnia whose Muslim population is approaching a majority.

To Benedict, these are strangers from a strange land threatening to erode "the identity" of Europe. The Vatican has no intention of grokking with the children of Allah...never has, never will. The ass whuppin' Saladin handed them to overtake the holy land in the 12th century will never be forgotten. The children of Yaweh don't play well with each other and have spilt much blood in the sandbox in order to plant crosses and crescents on each other's sandcastles. Now the battle has moved off the playground and much closer to the steps of the "European House"...but the rules of engagement have become more civilized. Gone are the days when his Holiness could dispatch Richard the Loinhearted on a decade long crusade to drive the invaders off Christian soil and convert them at the end of a sword.

Without violence as an option, The Vatican appears to be choosing a new strategy....fucking. "If we can't kill them or convert them, we'll out screw them"...'tis the new motto of the Catholic Church. Well maybe it's not that new, but this may be the first time they've actually defined it in strategic terms.

I have a hunch Orthodox Mormons may become the "in" crowd in the next decade.

The same concern is starting to penetrate America's cracker-ass-cracker elite.

From self appointed apostle, Pat Robertson: 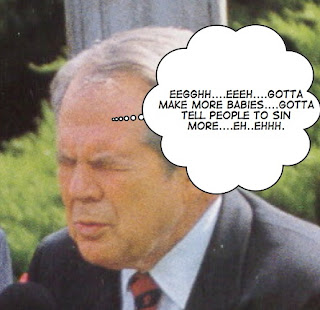 “Well, ladies and gentlemen, there you’ve got it,” Robertson said on his “700 Club” today. “It’s interesting, isn’t it? You know, the Protestant churches, there’s no doctrine of faith that I know in any Protestant denomination that calls for the takeover of the government and making other people second-class citizens. I don’t know of one denomination, Protestant or Catholic, that has that agenda. But yet, Islam has just that agenda, that they want to take over the government and that everybody else is a second-class citizen. That is the primary doctrine of Islam.”

No Pat...most of them just want to get rich...like you.

This Fox screenshot speaks for itself: 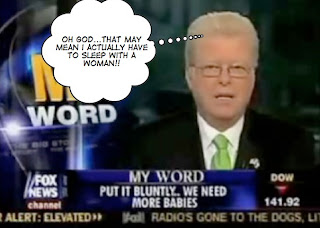 By "we" he doesn't mean brown skinned, Koran readers. 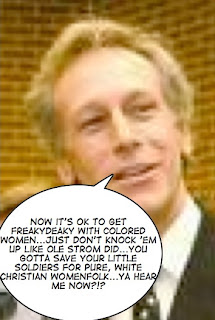 “I fear that in the next century we will have many more Muslims in the United States if we do not adopt the strict immigration policies that I believe are necessary to preserve the values and beliefs traditional to the United States of America and to prevent our resources from being swamped,” said Mr. Goode, who vowed to use the Bible when taking his own oath of office.

Fear is the pregnant word in that quote.

All right Christians...you have your marching orders. The 21st Century Crusade won't be fought on a battlefield...it'll be fought in the bedroom. For the first time in history, you have a Papal decree to get busy. Turns out our new military position is the missionary position. And most importantly...this is a battle in which we can't pull out...and no body armor...be a God fearing patriot...go get laid!
Posted by Jason Brad Berry at 3/24/2007 01:49:00 PM

This is a GREAT post! I was laughing through my tears. It would be funny, if only it wasn't true.

This is pure filth, on every level.

- This is pure filth, on every level.

ya know Anon, i think the filthiest level (and I'm curious to find out how many levels you think there are to this post...I thought I was only on one platform when I wrote it) is the sugar coated xenophobia on the Pope's part. At least America's racist assholes came out and said it...Benedict is a xenophobe, just like Goode, just like Robertson...he just can't say it without dissembling.

You're right, that is filthy.

Welcome to your Id:
http://en.wikipedia.org/wiki/The_Filth

Stay away from the Qliphoth.

the Qliphoth is your problem.

You say tomato...
Nina Simone says it's your problem also:

And that day will two monsters be parted, one monster, a female named Leviathan in order to dwell in the abyss of the ocean over the fountains of water; and (the other), a male called Behemoth, which holds his chest in an invisible desert whose name is Dundayin, east of the garden of Eden. - 1 Enoch 60:7-8

Why is it always the blue or the red? Is anger what makes things happen?

All you're being offered is the truth, nothing more. You should never go in the bathroom without a mongoose.

And I prefer Donavan to Nina Simone:

Excellent post. Loved it and yes I was laughing through the, er, filth.

Benedict has a lot to worry about in his own country. Sixty Minutes did a piece a couple years ago about how Italian women are looking elsewhere for husbands. There is an entire generation of young, employed, well off Italian men who are choosing NOT to get married. They have a name for them, and it's not Mama's Boys, but something like it.

Basically, the guys have Mama at home, doing their laundry, fixing their dinners, cleaning the house. Young Italian women have come into this century and the guys don't like it. So they maintain homes and apartments away from Mama, to "entertain" in a way that would make Benedict proud but barring procreation in every way, but they live with their Mama's with absolutely no intention of ever getting married.

What they'll do when Mama goes off into the great beyond we can only wonder, but it's becoming a really huge problem in Italy. And these guys are not all running off to the priesthood either. Not enough priests, not enough babies, too many Mama dependent boys, and Benedict. No wonder he's worried!

Benedict's country would be Germany, not Italy.

Somebody needs to get a life. Or a good jeweler.

Uh...nope. Benedict's country would be Vatican City....and that last time I Checked it's in Rome.

I'm quite sure Slate is aware that Benedict is originally from Germany, as does most everyone. It doesn't negate the point she's making about Italy. Read the article...the Vatican's anxiety is over Europe in general. I think Slate was just sharing the story about Italy in specific.

But yeah you're right...somebody does need to get a life...if that's all you gleaned out her comment.

Pedestrian thought is vastly overrated. Your ship is without liftoff. Don't blame the messenger.

"Mammone" is the term. The stats say anywhere from 70-90% of men under thirty, and some well into their 30's. Some say it's the fear of independent women, others say it's economic and the government needs to intervene to help couples, married or unmarried, afford an apartment. Put Mammone in your browser and you'll get lots of interesting and fun hits.

I was raised Catholic, Anon. I know where all the Popes in my lifetime were from, including Benedict, whom I had hoped would help some of the situations JPaul had created, but instead, seems to want to turn the clock back a few centuries.