A resourceful AZ reader was able to track down the Bearing Point Review which....I need to name this guy (other than bitch or fuckmook)....uh, ImagineANON #1 referred to in his response to AZ's accusations that Meffert scuttled the DOJ grant, thereby costing us a possible hurricane-proof communication system.

You can click on the images to create a larger file. 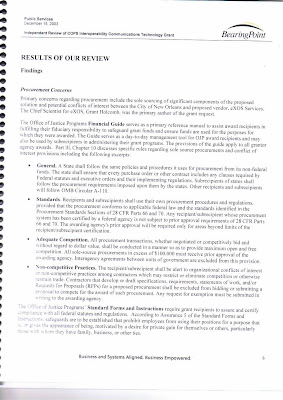 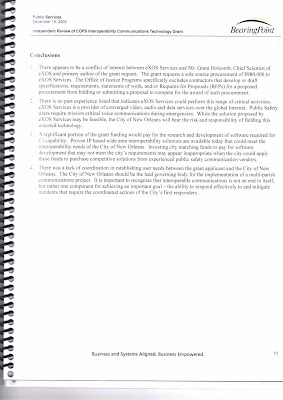 Bearing Point was contracted by Meffert and the city as "an independent auditor" to create this review. I parenthesize independent auditor as I am suspect of the motivations of Meffert in having the report created. ImagineANON #1 stated that Bearing Point deteremined that eXOS's communication system was essentially vaporware. I don't see anything in this report that critiqued the actual functionality of the system itself. The only semblance of this is Point 2 under the conclusion category where they bring eXOS experience into play and call the solution "untested technology".

I am attempting to get touch with Grant Holcomb, the owner of eXOS and apparently the person who helped spec the bid for the Department of Homeland Security and the Department of Justice. I hope to hear his side of the story.

Meanwhile BayouSt.JohnDavid has informed us that East Baton Rouge Parish's Office of Emergency Preparedness is already field testing the solution. Good enough for BR not good enough for us? hmmmm.

Meanwhile, Gordon Russell wrote a story on this in the TP which I have and can email to anyone who wants to read it. Just email at ashedambala@gmail.com

I cite the 2nd page of the review. Grant Holcomb was the Chief Scientist of eXOS, and he WROTE THE FREAKING GRANT REQUEST! Confilct of interest...I think so. Also, the grant request specifically requests 980,000 of funding SOLE SOURCED to Grant Holcomb. You tell me...no bid...home cooking...?

Also, second page, there has been no record of this system being used ANYWHERE AT THE TIME OF THIS REVIEW, and eXOS was not even in the business of providing this type of system!!! How can a city or the DOJ justify spending 7,000,000 on a system that was in development at the time of the request from a company who had no experience providing this type of system. You really need to read this stuff before you post it and respond.