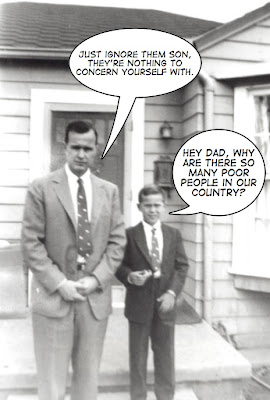 Can we accept these gifts without the Fed's involvement? I'll put up a paypal account and send an email to the U.A.E asking them if they want to donate online.

Katrina exposed this country's dirty little secret...we're not so super. For that, New Orleans must be isolated in this country's collective consciousness as an anomaly.

New Orleans was such an embarrassment that the Bush administration couldn't accept the nearly 1 billion dollars in aid being offered by other countries. Subsequently, this city is still running on life support without adequate flood protection. 1 billion dollars...we could have used that money to hire someone besides "the Corpse" to rebuild our levees.

It's truly infuriating to me....not only has the Bush administration failed to live up to it's promise to rebuild New Orleans, it stifled those who would actually help us. We are at the mercy of these incompetent, callous bastards until 2008...I hope we can survive until then.

Couldn't they at LEAST have accepted some moolah under the ruse of, "Hey, the Marshall Plan is finally giving us something BACK!" ????

Brother D...THIS is deep. Let me get my opinion across without getting emotional about this subject. Last Sunday at church, I was SURPRISED when the pastor was practically begging us to jump on board regarding the city of New Orleans. I feel that this ENTIRE country needs to get with the program and assist the city in rebuilding itself by ways of funds, physical labor, etc and for the record, I AM NOT a Kanye West fan. I voted for President Bush and I do not feel that he "hates" black people now poor people MAY be another story. In general it is very difficult to assist people who have NOT applied themselves in life and who are looking for free government handouts. I can understand if you need assistance due to a hurricane Katrina type situation, but when you refuse to get up and expect people to give you money, material items, etc. for the rest of your life - that is NOT right. Let's take a look at the abuse of the funds that were given. People were using the money for everything BUT rebuilding their lives. Also, I feel that the Nagin Administration has spoon fed many of these residents to the point that they had become co-dependent THEN Katrina came, Nagin ran and the people were left alone to find a way to survive. Enough is enough, but I ask you Brother D, where EXACTLY do we start? Please share your thoughts..

I don't doubt much of what your saying is true. My commentary was aimed more at our ethos as a nation than it was about the ethos of those displaced by Katrina.

I think that's a whole other conversation...which i wouldn't mind having, but what I was addressing here was the fact that this administration ignored the financial support being offered by numerous countries and why that happened. I feel in large part we are being ignored and neglected because we embarrassed this nation.

Your pastor's empathy is admirable and appreciated, but the truth is what this city mostly needs right now is a large scale effort to rebuild infrastructure,housing, and business incentives....and a comprehensive blueprint to do it. The foreign aid being offered to us could have taken us a long way down the path to reconstruction.

Thank you Brother D for the clarification!! This issue just has a way of stirring up some DEEP emotions, because I have so much to say. I am VERY pissed about this whole situation from the city government to the President's handling of this.

I've been flogging this idea since a few weeks after the Federal Flood: Since our government (and I use the term loosely) won't lift a finger to help, we need to form our own NGO to accept these donations. Maybe we could even get observer status at the UN! (might as well make me the "foreign minister", since I can stay in Mom's back room in the East 70's for free...)

You have my vote as the Acadiana U.N. Ambassador. Now let's get the cash.