Here we go again. New company....same fucking address as the mayor's admin. offices and Netmethods....you know the story. Although it seems Meffert's become more ambitious by moving out of the tech. arena....suddenly he's a developer. So lets see....software guru, CTO, Deputy Mayor, yachtsmen, wetlands scientist, and now....land developer. If there's a contract to be had, Meffert can provide the LLC.

As bad as this sounds....I hope the state holds back any cash they can from the city until Nagin is out of office. I'd rather suffer for 3 more years than watch Nagin funnel millions of dollars to his peeps and end up with nothing to show for it hence furthering our reputation as an incompetent, corrupt city.

I've said it once, I'll say it again.....Nagin doesn't care about anything but lining his chrony's pockets and setting himself up after he leaves the mayor's office. The sad part is, even knowing what's going to happen, there's probably little we can do to stop it. Bend over Nawlins, we're gonna get it again. 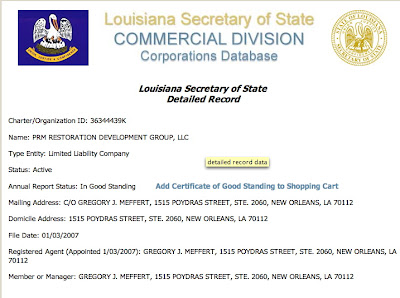 That is kinda funny, since they share the same address with Fannie Mae, O'Bryon & Schnabel, P.L.C. , Domengeaux Wright Roy & Edwards, L.L.C., Favret, Demarest, Russo & Lutkewitte, A Professional Law Corporation, Emmett, Cobb, Waits & Henning, A Professional Corporation, Excelth Incorporated, Wills and Probate Lawyer, Forman Perry Watkins Krutz & Tardy LLP, Morris, Edith H. - Morris, Lee & Bayle, Alvendia Kelly & Demarest Pllc, Honorable Leon A Cannizzaro Jr, Honorable Edwin A Lombard, Honorable Robert A Katz, Honorable Charles R Jones, Honorable Joan Bernard, and Atmos Energy Marketing Llc.
Do you think its possible that 1515 Poydras is a tall building with many floors and a few offices per floor? I would bet that there are a bunch of companies with that same address. I wonder if Meffert and Nagin are working with those companies too. Looks like we will have to investigate all of them, we have our work cut out for us!

We know who the "M" is in the name. Who are "P" and "R"? I'm with you Dambala. Let the State and the Feds hold on to the money until Nagin is out. I'd rather see the city delayed and screwed.

Opportunist covers all of the above. Shame on them.

You've got to be kidding me. Why am I not surprised in the least, however? I seriously hope there are some federal investigations or at the very least state ethics investigations into these activities. Just to clear the air once and for all for all of us who are a bit skeptical.

take that shit back home fuckwad.

I think the Border Patrol and Social Security Administration have offices in there too. Maybe Meffert is working for Bush. Scary stuff!

take that shit back home cumwad!

That's not even the point...if PRM gets any...ANY....city contracts, I'm gonna be on it like stink on shit.

This is fun. Dude, you do no have a clue. I don't work for Veracent or PRM. I'm just a concerned citizen that sees flaws in your conspiracy theory.
I'm not saying that the things they did were on the "up & up". If you are right, all power to you. I just think that you are reading far more into this then there really is.

if you're not one of them then you obviously aren't aware of these guys history, or that fact that they breed LLC's like rabbits in order to kick back contracts to each other.

You don't find it suspicious that Veracent (St.Pierre) and PRM (Meffert) offices are listed as being right next to each other?

Have you been reading the paper lately or living in a cave?

Sorry, no cave. Look, I read the papers...and they are going to print things their way. Everyone's views are skewed to one side or the other. Fox News claims to be fair and balanced, but they have a religious right agenda. The New York and LA Times, left wing agenda. Unless St.Pierre and Meffert are approached from a non-attack mode, you are not going to get the truth. You are always on the attack, never seeming to want the true...just blood. If you want that karma on your shoulders, fine...but I don't.
If you really want TRUE ANSWERS, approach St.Pierre and/or Meffert with a level head.

they have an open forum to respond to anything on this blog. I will post any response they want to make.

They've had ample opportunity to respond to anything I've posted. All they've done is whine.

My karmic debt is to this city and it's survival...my only regret is that I can't devote more time to exposing the bullshit that's destroyed this city for so long.

By the way, do you have anything substantial to add to the conversation or are you just a random dissenting voice. It sounds like your familiar with the story since you think I'm reading more into it than I should be....start talking. Tell me why I'm reading more into this than I should be. Tell me why this is conspiracy theory when 90% of what I've posted has been confirmed by second party media sources.

You either have a vested interest or you're incredibly naive. If it's the first, then start talking. If it's the latter start reading.

Let me just clear something up for any of you naysayers or Meffert embeds on this blog. I volunteered on Nagin's first campaign because I believed that he was our best shot to bring forth change and root out corruption in the city.

After Nagin was elected, I volunteered on the Nagin transition team and task force and worked closely with the Meffert and Imagine folks - Mark St. Pierre, Mark Kurt, Scott Domke and Paul Hastings. Based on the encounters I've had with them and many others - they have conspired to siphon money and rape and pillage the city's coffers and they'll continue to do so as long as they can get away with it.

They're nothing but a bunch of White-Collar Looters who've bullied, harassed, threatened and robbed this community blind.

Do you really think its an accident that St. Pierre and Meffert opened offices in the same building, 1515 Poydras, where Imagine's offices were already conveniently located in Economic Development? Nah, didn't think so.

Even after Meffert stepped down as CTO/Deputy Mayor/Insert Title Du Jour, he was meeting with the imagine boys and orchestrating their every move right in their offices at 1515. Don't believe me? Ask the folks who worked over there in our city's office of Economic Development.

In fact, Meffert used city money to have an entire section of offices built out in Economic Development for himself and the Imagine crew. Don't believe me, ask Oliver Thomas?

Greg, you must have a lot of time on your hands to post and monitor this blog. Oh yeah, I almost forgot, you're a shark, right?

“A shark can’t breathe unless it’s moving. There’s a part of me like that. I’m going to have to be doing something or I’ll go nuts."

If I were Meffert, Imagine or Mayor Nagin, I'd be scared. Cause if the feds don't get to you first, there's a mob of angry people you've burned and buried to craft your Golden Parachute.

My interest in this story is only the fact that they are trying to bring the great city of New Orleans out of the techno stone age. I've grown up with technology (and yes, I'm well over 30) and I like to see it here. As for corruption, wasn't this city founded on it, jk.
As an idea, why not contact these people? Go to their office and ask them questions...without the claws. Just remember, Veracent & PRM are NOT on the same floor, nor are either of them on the 20th. I had a friend walk that floor and neither had an office there. Looks like we need some more research. Just trying to find a "calm" path to the truth.

Interesting read all. Not trying to get in the middle of anything, but I looked up the info on the Sec. of State website and the address for Veracent is different than what is posted here.

The anon that worked with Meffert and St. Pierre was right. Those guys operated a covert operation from Economic Development's offices in 1515 Poydras. They crafted plans and used the offices to meet secretly with potential bidders. Here's something for you. Ask why the City cancelled the many Technology Services RFPs? I have a former City Hall anon who confirmed it was because the Imagine guys screwed with the process. She also says that Nagin et al was made aware of potential evidence about the Greg's guys conspiracy to steer the technology services contract to Ciber. The RFP was cancelled and Meffert used Ciber's Federal GSA Schedule instead. [For those of you who do not know what that is: GSA stands for U.S. General Services Administration. It maintain a Federal Supply Schedule. This supply schedule can be used by Federal Agencies to procure/purchase supply and SERVICES without going to bid. Somewhere around 2004, the GSA begin to allow State and Local governments to use their purchasing vehicle which also allows S&L to bypass local BID and RFP processes.] In an effort to discredit his critics Meffert and his crew then put it out to bid again in 2005, this time they got it past the sniff test and Ciber was awarded the contract in August 2005. The anon goes on to say that Ciber turned in their proposal 2 mins before the 3pm deadline and that Imagine guys were all over City Hall meeting secretly behind closed doors the day the RFPs were due. Interesting...

We need more City Hall insiders that worked with Meffert and crew to come forward. I am encourging the former City Hall anon who was kind enough to share her insights to come forward. She and many I suppose are scared their accounts won't actually get these guys behind bars and will ultimately result in some revenge or retribution from not only Meffert, Nagin and crew but...get this...from other politicians and businesses in Louisiana. The anon believes the City and State is so corrupt that it would be hard to maintain a job without looking over your shoulder. Man, this shit is worse than I thought. The only way now for anything to get resolved is for the Federal Government to step in. This way witnesses could be protected.

Is this to replace St. Pierre, Domke, and boys?

Having seen my good efforts thrown back into my face and after screaming at my Congresswoman, I wrote a letter to Garland Robinette (actually I just CC my letter to said Congresswoman to him). Nagin has ticked me off to the umpteenth power and I simply explained that any money to New Orleans will be met with massive government oversight. I plan to stay on Henry Waxman in an effort to make sure that this is done.

PRM is PRM Realty out of Chicago. Meffert screwed over several folks who brought them to New Orleans to help redevelop the Iberville Housing Projects and other developments. Meffert cut them out because the folks that PRM was dealing with were above board and Meffert didn't want those types (honest people) interfering with his plans to maneuver himself into the financial plans of PRM. Call the folks in New York & Chicago who are associated with PRM Realty and you will find that piece of shits fingerprints all over the place. Why in the hell is his wife still with him?