Move Over John Derbyshire, we've got a new Asshole of the Year Contender

It's been about 19 months since Katrina hit New Orleans and the subpar levees built by the Army Corps of Engineers failed, destroying most of the city, taking lives, and fucking things up royally for most of us. So one would think that by now the attempted poetic waxings of the ignorant, misinformed self-aggrandizing assholes in various media outlets would have died down by now.

I stumbled across this gem earlier today, by a former professional wrestler-cum-philosopher, whose moniker, The Ultimate Warrior, belies his narrow-minded, foolish rantings and is an insult to the term warrior
here are some highlights from the ultimate one's recent article: 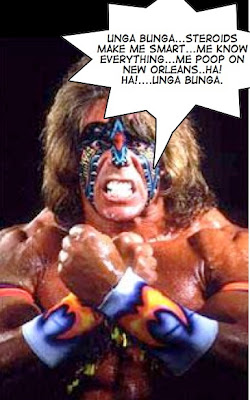 Anyone who expresses sentiments like "How could they let this hurricane come here and do this to our lives?" is a kook as far as I am concerned. Truth is, these people thrive on despair and disarray. Chaos -- mentally and physically and in the way they conduct their lives -- is nothing new to them. They forge their whole lives in and around it. This hurricane, to them, was nothing more than rearranging the furniture. They never gave a care for order, cleanliness or function before, but once they get the attention of someone who can take over the responsibility of their lives for them, they go on tirades about how their lives had been ruined. Their lives were already in ruin -- self ruin.

and it gets better:

Everyone makes mistakes, but only stupid people make the same ones over and over again. Beginning with the choice to sit around expecting someone else to hand them a wonderful, beautiful, healthy and wealthy life. These people should be thankful all humans are not undisciplined, promiscuous, depressing, doom-and-gloom maniacs like them. Some of us care to do better all the time, not just in the face of disaster when someone else will do the work and pick up the bill. If all people were like this, it wouldn't only be New Orleans that was a toilet bowl right now, and it wouldn't be so because a hurricane caused it.

toilet bowl? where the fuck does this asswipe live? What glorious Utopia has the pleasure of counting him among it's citizenry? and more importantly, what the fuck is he talking about? I don't know ANYONE in New Orleans sitting around "expecting someone else to hand them a wonderful, beautiful, healthy and wealthy life" - and I know a lot of New Orleanians.

UW - Here's a thunk for you - get off the juice and get informed. If you knew ANYTHING about the post-katrina damage in New Orleans, you'd know the disaster in New Orleans was MAN-MADE. In case you doubt this, just ask the fuckers that caused the disaster in the first place - they've already admitted it publicly.

I could go on here UW, about how our culture, our music, architecture, cuisine, arts, and historical significance are without equal in this country, and how this city has inspired generations of some of the greatest writers, artists and musicians anywhere. And how we're pretty much the soul of this entire fucking country. But if you don't care about that shit, we could talk about something I'm sure you do care about: oil. And how 30 PERCENT of the nation's oil and gas supply comes right off our coast, through our state to your local gas station (assuming you live on the east coast). Want to get rid of New Orleans? You might want to think about how many stupid fucking Ultimate Warrior hats and t-shirts you're going to have to sell to fill up your Hummer (I'm guessing here - you don't seem like the Prius-type) when gas prices are $5 a gallon.

Okay, I'll close with one more brilliant excerpt from this oiled-up thundercat-in-ladies underwear, because it's just too good to not share:
Truth is, before Katrina it was nothing more than a pornographic cesspool of decadence and depravity. You know, an East Coast version of the Las Vegas take on vacation time -- "what you do there stays there." You go there, drink and behave like a pervert, take a huge dose of antibiotics and a nice long shower before you hop on the plane back home, and, "Hey, who knows any better?" You go back to the church, PTA, and local council and "squarely" fit right back in. One thing is for sure. IF New Orleans ever was a great city, it certainly was not because it had leaders and citizenry like the leaders and citizenry it has today. Hurricane Katrina will go down as a historic catastrophe, yes. But what's most historic are the dour, helpless suicidal attitudes by the leaders and the people. As an American, I am appalled at having to witness this.

Really? Well, as a New Orleanian (and an ardent supporter of the first amendment, btw), I'm appalled that you not only wrote something so stupid, but that it actually got published. And I'm a blogger for fuck's sake.

What I love about fuckmooks like this is their ability to spout off such brilliant insights without any fucking clue as to what they're talking about. I'm betting the transition from pro wrestler to pundit was pretty seamless for UW. When was the last time he came to New Orleans? And if that's how he spent his time here "drink and behave like a pervert", well, that says a lot.

You see UW - a lot of people come to New Orleans and don't behave like perverts. They come here and dine in some of the best restaurants in the world, catch some of the top jazz musicians in the world at a local clubs, they shop for antiques and art, they meet friendly New Orleanians, who despite all the shit they've been through in the last 19 months, still manage to smile and treat visitors with respect, kindness and welcome them here with open arms. Some visitors even come down and help out in areas that need it most, like the lower 9th ward. Now I know that concept may be beyond your seemingly steroid-riddled brain, but you could help a little by just shutting the fuck up when you don't know what you're talking about.
Posted by Jason Brad Berry at 4/03/2007 12:15:00 AM

Bravo. What an ass. You have to check out his website as well:

No wonder steriods are illegal. I hope he's not suggesting he is the mental ass kicker after writing something like that.

Like I fucking care what some over-grown wrestler thinks. (they don't)

Good on ya's for attempting to clue this fuckmook into what the folks down here are REALLY about.

Dambala, don't let this mook get to you. Get this, he even legally changed his name to "warrior". He's from Indiana, and has not even wrestled in 8 years. He's trying to make a living now as a conservative talk show host.

Here's a tell: Vince McMahon kicked him out of the WWF for being on roids. Vince. Mc. Mahon. That must mean this clown is going to Alzado on us in a month or two, and then we won't have to worry about him any more.

I think that his remarks were way off base, but I'm sure he was talking about all the people that have their hands out here. From the poorest to the richest, there are some of those types of people here. Sorry!

Asshole of the Year? You should check out Fark more often. There are 10 or 20 people as bad as this, every single thread. Funny thing is, they're all from Indiana or Ohio or Virginia, too.

Okay, so he hasn't worked in, what? 8 years? (Okay, so there are "farm leagues" where has-beens go to die, but still --- Alabama rasslin' only pays so much.) And yet he feels "empowered" to talk down about ANYBODY ELSE?!??!!

I'd dearly love to be around when he juices just that one last time too much, and we get to watch his big, empty, makeup-stained head explode and splatter all over the low-rent gym walls.

Anybody who can't "appear" in public without a mask is obviously a chickenshit little bully who's probably waaayyyyy more comfortable behind a klan hood. Does anybody have his vital statistics? I'd wager that he's about 5'4" and was picked-on a LOT as a kid.

Dambala, I'm new around here and have enjoyed your blog quite a bit, but this fucking moron is going to make me barf up my Ponchatoula strawberries, and that really pisses me off.