In an eerie, supernatural coincidence....two elusive creatures made public appearances on the same day. The Loch Ness Monster, aka. Nessie, was captured on videotape taking a swim in the murky waters of Loch Ness, Scotland.

Unbelievably, on the same day, the enigmatic and rarely spotted Mayor of New Orleans, C. Ray Nagin, popped up at the National D-Day Museum in the city's Central Business District. 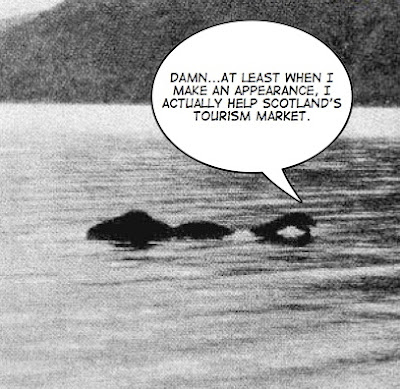 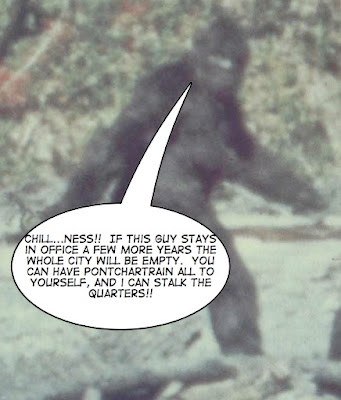 Heard Nagin touting the "NOLAReady" text messaging system. Any truth to the rumor that while Jefferson (and other parishes) went with a standard system (mystate.us) that is deployed around the country and being subsidized by the Federal government, Orleans either purchased a separate one or paid contractors to develop the system from scratch?

Also find it interesting that he is hailing this as a great acheivement when it is a pretty simple solution that you can get from vendors right out of the box...

The so-called Mythological folks seem to know their own kind.

Just like Lift Nagin and his buddy Ernest Collins should be investagated by the FBI. Collins has affilation with Lift. Not to mention the 100,000 dollars he received as a grant...

ernest collins will be reappointed to his old position.Is their no one out there to handle this job.. Please get Stephanie Dupry Back..This man is a crooked little dwarf!!!! Shame on you Nagin!!

I can't imagine that he'd put Collins back on staff after this....that would be inviting trouble...almost as bad as putting Meffert back on staff. I haven't blogged about LIFT because I don't really know a lot about the situation...but I do know Collins was all up in their shit. We'll see where the investigation goes.

ANON 1...do you know who got the contract fo the "NOLAREADY" text messaging system?

Yeah, but do you have your 'C.Ray for Governor' bumper stickers yet?

Nagin is a waste and I was COMPLETELY surprised that he was reelected. Doesn’t say much for the voters here in New Orleans. I don’t want to think that Meffert is stupid enough to get into local dealing, but I have been wrong a couple times in my life. As for Lift, I don’t know anything about it.
Side note, I think I will start a web site to elect Nagin for president!