What we die and kill for....black, gooey liquid

I got turned on to Crypotogon by Oyster the other day and I have thoroughly enjoyed reading his blog, present and past posts. The graphic at the top of his page reminded me of one of my favorite poems written by Canadian Lt. Col. John McCrae about a WWI battlefield in Flanders, Belgium....In Flanders Fields: 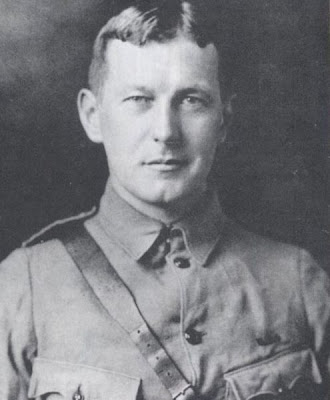 In Flanders fields the poppies blow
Between the crosses, row on row,
That mark our place; and in the sky
The larks, still bravely singing, fly
Scarce heard amid the guns below.

We are the Dead. Short days ago
We lived, felt dawn, saw sunset glow,
Loved, and were loved, and now we lie
In Flanders fields.

Take up our quarrel with the foe:
To you from failing hands we throw
The torch; be yours to hold it high.
If ye break faith with us who die
We shall not sleep, though poppies grow
In Flanders fields.

The interesting thing about WWI is the surprising lack of literature which emerged from it as opposed to other conflicts, i.e., Civil War, WWII. The most notable, of course, is WWI German veteran, Erich Maria Remarque's All Quiet on the Western Front. In my opinion, the best wartime novel ever written...that's not to say I've read them all....or even a fraction.

I remember one of my literature professors in college speculating that one of the reasons for the lack of reflection following WWI was because it was such a horrific war...unlike anything the world had experienced up to that point. Trench warfare was introduced in WWI as well as chemical warfare. WWI marked a distinct shift in the "psyche of war"...it ushered in a dehumanization of war which eventually reached it's pinnacle in WWII when the crew of the Enola Gay released Little Boy on Hiroshima immediately extinguishing 70,000 souls. My professor suggested that the trauma of WWI was so overwhelming, we could only afford to move past it....it was just too painful to relive. 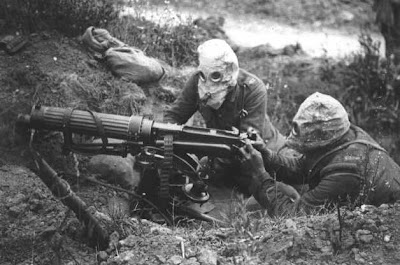 Our only memories of WWI consist mostly of faceless soldiers in gas masks.

Today we launch Tomahawk missiles from ships hundreds of miles from their targets or use remote control drones to deliver deadly payloads. The automaton has become the reaper as we sit back in the comfort of our homes and watch YouTube videos of missiles with depleted uranium payloads striking targets half a world away. We no longer see the "whites of the enemy's eyes"....we just see a glowing infrared satellite image of people getting blown to kingdom come. 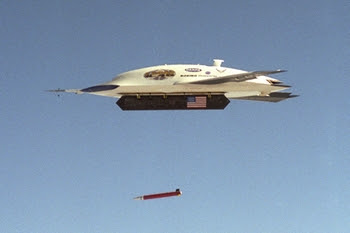 
We are currently fighting wars on two separate battlefields. Most Americans are oblivious to the purpose of these wars or why we are even in these specific countries. WMD's, terrorist cells, the "spread of democracy"......that's what we've been fed...but this is the true equation:

We're entering a perpetual state of warfare which will not only run decades, it will never end in our lifetime. We have become so desensitized and sheltered from the true horrors of war....it's become entertainment for us. For the first time it's a cohesive strategy for the military industrial complex and the general population as well. We don't even have to suffer the trauma-induced amnesia the WWI generation did...we're now sheltered from that inconvenience.

Although I really suck at poetry, it inspired me to adapt In Flanders Fields to our current situation. My apologies to John McCrae:

In Iraqi fields the oil does flow
Beneath the sands where nothing would grow,
We marked our place, make sure you know.
And in the sky,
The missles of uranium, fly
Scarce concern of the lasting effects below.

We are the living dead,
We shop, we drive, we watch the LCD glow,
What is real, what is show,
Have faith that CNN will tell us so.
How many lie in Iraqi fields?

We have a quarrel with a foe,
Our trusted leaders have told us so,
Exactly who this enemy is, we do not know,
We can't let that stop this show,
SUVs must go, go, go.
If ye break faith with those who drive,
Do not expect to stay alive.
See, this country does not sleep,
Unless we get our poppies cheap.
Ambien, Valium, the price is just too steep.

Oil must flow, in Iraqi fields.

Great post (no rotten 'maters from me). Very moving, darlin'.

We even use words to distance us from the experience of war. In WWI, the soldiers were "shell shocked". Now, they have PTSD (as if "post traumatic stress disorder" isn't clinical enough - it has to be abbreviated). We hear on CNN on Sunday's about the number of "troops" killed each week (even "soldiers" would be more humanizing). What were once called "battles" are now "military actions". I could go on all night.

And instead of everyone's sons being subject to being drafted to "fight for freedom" an all volunteer *wink* *wink* military pays signing bonuses to desperate young people without any other resources with which to fund their futures.

Yeah, it's such a deep topic...you can go on forever...just like the war itself.

The effect this path has on the overall psyche of the country will be devastating...compounded by the fear pimping going on domestically. But that factor doesn't compute to the idiots leading us into this hell hole.

You know first hand what that effect is. How do you make a zombie nation understand that this isn't the direction we should be headed?

I don't know...personally, I feel helpless.

Oh, so the Afghanistan war is about opium, eh? Interesting how the Taliban had choked off opium production big-time. Now that they're out, production is back to record levels. Follow the money!

One reason so little literature emerged form WWI is that there was so little time between it and the next one. Twenty years after WWI WWII had almost started.

One historical note, trench warfare didn't really start in WWI. There was a good bit of it during the American Civil War, especially around Petersburg, and Vicksburg.

Did you hear Bush's words at CPAC? He said "prosperity and peace are in the balance" in this coming election. Seriously. With a straight face. Of course, he's right, just not in the way he meant to be.

Maybe it's the end result of unbridled capitalism, this notion that any road that leads to profit is a valid road. I honestly don't know the answer, but I do agree that we're on a path that has structured into our economy, long-term conflict as a business model. The thing that angers me is that this obvious "fear pimping" is working so well, that so many just swallow it whole (like your fish dinner, above - :) - without questioning), while we continue to stir up a hornets' nest and pour gasoline on the flames of real America-hating terrorism. How can anyone believe Bush and his war in Iraq have made us safer?

I can't answer your question, though. There seems to be no end to dumbasses willing to buy into it all. Maybe if we (this mystic "we" would have to be congress, I suppose) invoked the Constitution and brought the wrath of law down on these criminals, then the tide would turn. Real justice does that sometimes.

But, I ramble. Off to make some pots and clear my mind. Happy Saturday, darlin'.