Got your canned goods?

I'm not talking about hurricanes either.
IndyMac Bancorp, a California based bank ,is insolvent. It's an FDIC bank with about 18 billion in deposits....read this from bankimplode.com:

Referring to today’s press release on The IMB Report, Indymac’s company web site, an LA Times report refers to “a weekend that saw depositors line up at some of its San Gabriel Valley branches to pull their money, as they reacted to news reports questioning the company’s survival.” Indymac’s article responds with “while branch traffic is somewhat elevated this morning, it is substantially lower than on Saturday, and we are hopeful that this issue appropriately abates soon…” A thread for the ICLC shutdown has begun on our Discusssion Forum.

Let's do the math...IndyMac may or may not be experiencing a run....they have 18 billion in deposits and are FDIC insured. The FDIC has about 53 billion in it's coffers to back it's insurees.

The first real run...if it is happening on IndyMac....will trigger an FDIC seizure, which could snowball into a panic and runs on the larger banks...Lehman is probably in the most precipitous position at the moment.

What's a poor FDIC boy to do? Super-quiet, stealthy seizures? Payment plan bailouts over multiple year periods? Bow at Bernanke's altar and hope he turns the Treasury printing presses up to a Nigel Tufnel 11? 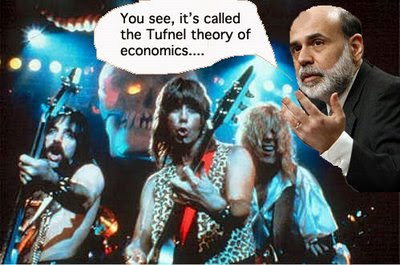 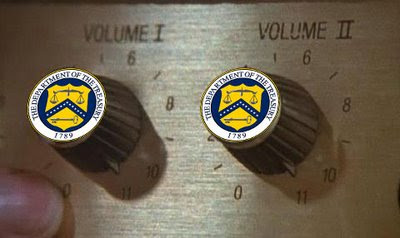 The Tufnel Theory of Economics in Brief : When currency valuations within a closed economic system have been exploited to the point of diminishing returns....invent a new magnification of said currency, step outside said closed system, and most importantly crank the motherfuckin' volume up! Everyone will be rocking out and enjoying themselves too much to figure out that one plus one no longer equals two. If anyone starts to notice the inconsistencies, feed them Johny Lilly strength acid, fire up the lasers, and show them Godel's incompleteness theorems.

Worry about the hangover in the morning.

You see any sweat beads on Bernanke's bald dome?

Anyway...as of tomorrow, I'll be on the other side of this pale, blue orb....literally. If the country goes to billy hell, somebody send me an email...and pictures. I'll send you guys pictures and updates of the wonderful new Halliburton headquarters built with American tax dollars and lives.
Posted by Jason Brad Berry at 7/11/2008 06:00:00 PM