I had a very disturbing conversation this afternoon with a member of the Louisiana ACLU. I formally contacted them to find out what their agenda was to combat "The Louisiana Science Education Act" which sailed through the Louisiana Legislature and was unsuprisingly rubber stamped by Bobby "I see dead people" Jindal.

The State Board of Elementary and Secondary Education, upon request of a city, parish, or other local public school board, shall allow and assist teachers, principals, and other school administrators to create and foster and environment within public elementary and secondary schools that promotes critical thinking skills, logical analysis, and open and objective discussion of scientific theories....

...forgive me for interrupting, but did we need to create a new law to ensure BESE is promoting "critical thinking skills, logical analysis, and open objective discussions" of anything? Isn't that, by nature, the goal of education? Oh but wait...here come the qualifiers....

...including, but not limited to, evolution, the origins of life, global warming, and human cloning. 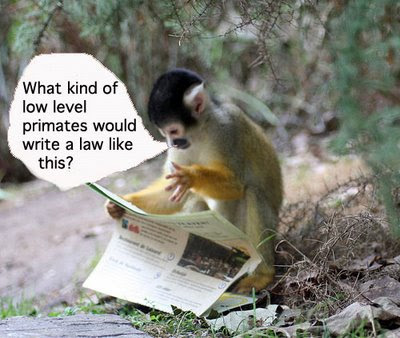 Great! While we're at it let's see if BESE can help the LA. Legislature with their critical thinking skills so they'll stop writing idiotic bills.

I don't want to get sidetracked here, because the point of this post is not about how stupid this bill is...it's about the impetus behind the bill.

The official authors of the Bill are 4 Senators: A.G Crowe from Tammany, Ben Nevers from Bogalusa, Neil Riser from Columbia, and Francis Thompson from Delhi.

The unofficial author of the bill is The Louisiana Family Forum and it's director, Gene Mills.

If you have the stomach to wade through LFF's morass of a website, you'll start to get a pretty clear picture of their true platform, intent, and tactics.

Here are some highlights:


Bible as History and Literature

Survival of the Fakest

You may be wondering why I am bringing all this up....
.... I'm bringing it up because you need to know how powerful the LFF has become in this state. I would dare say they are the most influential lobbying group in Louisiana. YES>>>READ THAT SENTENCE AGAIN
I have no doubt the ambiguously titled "Louisiana Science Education Act" was authored by Mills himself and put into the hands of 4 stooge Senators who obediently pushed it into law. Incidentally, one of those stooges, Crowe, was awarded the LFF's 2006 "Family Advocate Legislative Award".
Oh...and Crowe is the swinging dick (chairman) of the Consumer Affairs and Technology committee....
...technology....the irony is thick....
Would he be an expert...in like....let's say....the technology Noah used to stuff one sexual pair of every species on the planet in a big wooden boat?
I heard a story regarding the origin of the bill which is rather telling. An un-named, south of I-10, legislator tried to contact the authors of the bill and the LFF to provide commentary and feedback...he/she was told "being a Catholic", his/her input wasn't needed.
I guess it's good to know what flavor of indignant, racist, homophobe we're dealing with here.

Just how influential is the LFF? Well, take a look at their Xmas video gala:

I'm used to hearing Piyush aver his devotion to "the Christ Child" ad nauseam....I'm not used to watching him lick the heels of Mills on High.


SB733 is now a law (Act 473)...it sailed through with almost no opposition....the dissenting votes were cast by 3 House members: Jean-Paul J. Morrell, Karen Carter, and Patricia Haynes Smith...I'm proud of N.O. reps for making a stand.
Please contact them and let them know you appreciate their integrity (ht/ Puddinhead):
Karen Carter
Morell

I urge my fellow bloggers and every other rational human being in the state (or for that matter the planet) to keep their radar tuned to LFF's maneuverings and machinations....473 is just a small victory in what this increasingly powerful organization sees as a holy war to turn Louisiana into a righteous, evangelical empire. If anyone is going to organize against these fuckers, it's going to be us...the blogs. It's time for us to start paying attention before they criminalize homosexuality, pre-marital sex, Islam, Catholicism, burlesque, scientists,  and Dambala forbid...Voodoo, in the next legislative session.

The irony is in the words "good critical thinking skills."

I shot off an email of support and thanks to my Rep., J-P Morrell, for his stand on this vote. I guess he's one the LFF will be coming after when he's due for reelection.

Count me in to stay on top of these evil freaks.

They want a Culture War, we'll give it to them.

The right has perfected the Rovian art of naming something exactly opposite of what it actually is.

What about the theory that the smooth sailing for this bill was in part due to the pay raise non-veto promise?

Has that been debunked?

haven't heard that....i heard that the school voucher deal was the bartering chip for the Legislature but not this bill. I don't think any bargaining was needed to pass this one.