Damn Jackie....get yo' party on

I just saw this quote in Clancy's column of Councilwoman Clarkson explaining how she got sucked in to the Nagin ass-smooching fest next friday:
Contacted last week after the invitations became public, Clarkson distanced herself from the Nagin award. “I was expecting to be on a host committee to honor Katrina survivors,” she said. “I love Mr. Bernardo, and when he asked me to be on a committee to honor Katrina survivors, there was no mention of the mayor, and no mention of me being co-chair.
That's pretty funny....she distanced herself from Nagin and allied herself to Mr. Blow.
Of course I'm not seriously suggesting she knows Bernardo's true profession....but dammit...I do have photoshop...and well....
Breaking News:  While many New Orleanians have been shocked to learn that Mayor Ray Nagin will be honored this Friday by the "Excellence in Recovery Host Committee",  Many more were unaware that New Orleans also hosted an award party at the House of Blues' Foundation Room by the " Not-So-Much-Excellence in Recovery Host Committee" which was also organized by local photographer, Bernardo.  The party featured folks who just can't quite seem to get the recovery thing down pat: 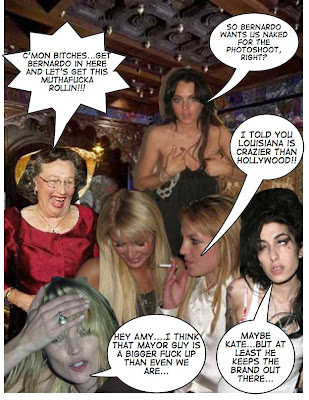 I think we should officially rename Nagin's award "The Amy Winehouse Award for Excellence in Recovery."
Posted by Jason Brad Berry at 8/17/2008 02:38:00 PM

That is a thing of beauty