Its the fucking end of the world, man!!! I'm freaking out!!!

That's what the three stooges want you to believe...Paulson, Bernanke, and Bush. Don't buy it. It's just the culmination of the financial shell game multi-national banks have been pushing on us for the past century. Now they want to shove a vacuum hose up our arse's and suck out what's left....and they will succeed. Why? Because they own the majority of our so called representative government sitting on Capital Hill.

This is like the shepherds telling us "sheeple" we have to tear down what's left of our fences because the wolves are dying....and without the wolves preying on us....well...all hell will break loose. Seriously...that's exactly what is going on.

I would plead with you to call your congressmen and tell them to kill the bailout...but I know it would be useless.

Here's what we're leaving out of this whole equation. What happens after the bailout? Is the economy going to magically change? Hell no...it's going to decline even further because people are losing their goddamn jobs, houses, and income. The only thing that has been propping up this economy for the past 20 years are the predatory lending practices which have thrown Americans into an endless sea of debt. This economy needs to collapse because it's NOT FUCKING REAL.

Now we're going to take what little cumulative wealth we have left and pay out the crooked bastards who put us in this position in the first place. It's really brilliant...on their behalf.

But hey...we still have football. 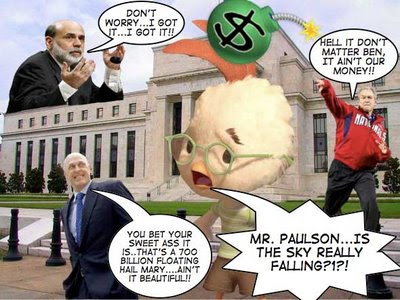