Mayor Nagin: No impropriety in trip to Hawaii with former tech chief

He is pathologically incapable of accepting responsibility for anything. Really. Can anyone recall a moment when this man admitted a mistake? Ever? I mean even Bush admitted he made mistakes.

Not only did he deny any wrongdoing....he actually praised Meffert. Wow. That's not an excited wow...that's an I need a drink wow. While I go do that, I subject you to this god-awful musical analogy:

These guys are really close....maybe too close 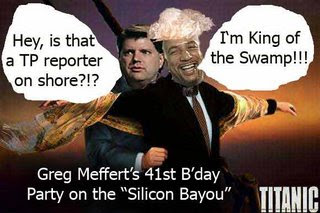 people at work look at me like i'm retarded when i tell them i've been reading this story since 2006.

thank you for making my life in new orleans more informed.