This explains so much...

Little did I know our police chief was paranoid schizophrenic.

Riley's recent comments came in a wide-ranging interview in which the chief, who has said he will leave office in May when Mayor Ray Nagin's term ends, blasted his critics. He decried the local media, some politicians, business leaders and a "shadow government" -- all of whom, he said, have joined forces to make him and Nagin appear incompetent.

"There are certainly people in city government and leadership positions who are incompetent, who are blatantly racists, who have done everything they could to make this administration fail,"

Riley said. Riley said that unnamed "powerful" people have launched a campaign to downplay his and Nagin's successes as city leaders. 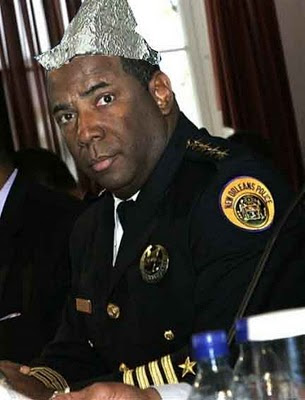 A "shadow government"? Well, if they do exist they really suck at what they do man, cause they allowed Nagin to run this city into the ground for the past 8 years.

The shadow Mr. Riley is afraid of is his own.

I wonder if he's mistaking them for the shadow government that got Nagin elected in the first place....you know, all the white republicans Nagin fed contracts to over the past 8 years. Is that who we're talking about here?

It's truly amazing that these guys can't take responsibility for anything. Now all of their failures are the result of some mysterious white cabal? And Stacy Head is the High Priestess? And Riley is conveniently the one spouting this rhetoric now, at the end of his tenure and in the final weeks before an election?

There is a conspiracy but it's not the one Riley is prophesying. The call on WBOK was obviously a plant....and it was poorly orchestrated at that.

I think Riley needs to produce this email or resign....that simple.

Oh, and if he does produce an email, he needs to explain how he got it, where he got it and be prepared to prove the email hasn't been altered. Which means the source (Head) and the recipient(s) all have matching data, as well as every node in between....maybe we can get another LTC investigation or tap Sunblock...wherever they disappeared to.

Brendan McCarthy Tweeted this "Interesting story, w/ a political analyst to weigh in on how a possibly fictional e-mail could possibly impact a race": http://bit.ly/8pCkFt

Got to love the deep wisdom of this Tulane professor Brian Brox:

"If however there is proof, and he produces an e-mail in which this is actually confirmed, it could be very devastating for her race (for re-election)," political analyst Brian Brox said."

Off-camera, Riley told WDSU that he doesn't believe the e-mail is a big deal, that he's never seen the message and he doesn't have proof that Head actually sent it.

I see this so called site is ignorate of the truths.

Life will be brighter than noonday,
and darkness will become like morning.

You will be secure, because there is hope;
you will look about you and take your rest in safety.


You and you RACIST LIARS WILL SEE

AZ, the aluminum hat is priceless. i think the last anon poster's cap is wearing his too. Maybe all those Blakely cranes are messing with the reception.

Hey "Ignorate"
The "THRUTH" is you need spell check, as well as someone to give you a reality check.

Anonymous comments aside (prayers or curses) this concept of an email that is 'evidence' was brought into public discourse - I need to see it. I never thought W.R. was the problem,and actually I'm very satisfied with MY local police Major, Bruce Little - but this is like Eddie Compass crazy.

Was Nagin really a Jefferson tool?

Did Jefferson really hand pick Riley as his man?

Why does Riley have policemen who run/ran the Head recall campaign?

And is Tracie Washington funded by bill Jefferson?

And did Tracie Washington, Riley, and WBOK (and their, er 'caller' or whoever he works for/with) coordinate this whole email canard to take down Head in what Jefferson used to consider HIS district and that of his brother and main squeeze, which they collectively treated as their own private money chest and playground?

And is the drug trade well under control in Central City, or is that just some big runaround where people higher up get a little taste, right up to the tippy-top??? And do any voting irregularities ever take place there?

Used to have the peeps come in to my office and say how the gov't was watching them all the time. Gov.got into their heads. So the "shadow "gobmint" reminds me of this. And the big plot to discredit Ray and Phat Chief. They are all out to get you, man. They are in your head. Better run. It's not good for you, man. And did Chief Phat stay at Ritz Carlton during Gustav. I heard this but don't know if true or not. I stayed in my house. No big deal but the Ritz woulda been nice.

...Riley was also (yesterday or a couple days ago?) on 990 AM with Irvin Mayfield (I think it was his show) amd coincidentally enough Mayfield - asking Riley for a one or two word summation of each name - went down a long list of every local pol (the whoel council, Nagin, all the candidates for mayor) and ended with a great crescendo with who else but....

Riley was asked to as with the rest come up with a quick summary of what came to his mind with that name.

I'm surprised that didn't get more coverage, but then I wonder who was really listening and who really heard about it.

Personally, I think this stuff is directed towards regaining District B for the for-profit minister crowd more than anything else, and that is and was where Nagin, Boyd and Washington were going with their email ploy long ago (though with maybe some beneficial side aims that may or may not have panned out over time).

- You will be secure, because there is hope;
you will look about you and take your rest in safety.

Thanks for the kind words, O.C.!

Dambala is The Truth

Looks like you're onto something by asking about Riley at this point, Zombie.

Here's my take on any "conspiracy" and why it shows how inept both Nagin and Riley are.

What they are calling conspiracy is just governmental process.

These people put force on the government. I'm sure some group like the Tourist and Convention lobby is always up the Mayor and Police Chief's butt, who ever it is. And I'm sure a lot of the people in that lobby are white, but I doubt they are motivated by skin color.

I don't think there's any "conspiracy" as much as its "Well that's how it works. You just can't handle it. So you cry about "these" people being out to get you."

I really have to stop reading all this coverage for a few days cuz it MAKES ME SO ANGRY!

Nagin and Riley remind me of some one who, when you're playing a pick-up game, always cry foul when you touch them as a matter of course and within the boundaries of the rules. So they have to pick up the ball and complain till everyone says, "Ok" so we can get back to playing. Then once they get to the other end they are the most flagrant fouler and pull the "Hey! Its a STREET GAME, ITS A STREET GAME. You got to be tough." When they're the biggest pussy on the court.

dambala, u r rt. OC spoke a blessing instead of a curse like Balaam in the Bible

expect to see more of this. riled up and nagin acting as political spoilers to cast aspersions. no political downside for them.

It is immature and unprofessional for a police chief to play a 'sum them up in two words' game about elected officials.

He should be cultivating good working relationships with these people.

What kind of public figure goes on air on a radio show to play that kind of junior high school game?

Give Cheif Riley a box of tampons and a training bra: he's a thirteen year old girl.

i had to let him know my thoughts on the lack of professionalism: