A quick PSA to let folks know one of my favorite New Olreanians, Danny O'Flaherty, will be performing at the Deutches Haus Friday, July 31, from 7 to 10 pm. 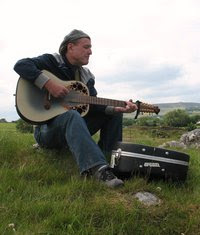 Just last month I was having a conversation with a friend about things lost after Katrina and what we missed most.  At the top of my list was O'Flaherty's Irish Pub.  I loved that place....loved it.  I loved the pissed off bartenders, the shusher in the concert room, the amazing musicians, the upstairs special event area that would host all kinds of cultural events like Moscow Nights, etc....damn I miss it.

On a side note, I used to work at an Irish Pub in Alexandria, VA. where Danny and his brother used to play before he moved to Nawlins.  Ireland's Own was run by this....well....tyrannical, little guy named Pat Troy.  I'll stop there cause I don't want to wallow in the misery of the man, but I did love the bar and the people I worked with.  For about a year, I paid the bills slinging pints at IO's.  I finally decided the money wasn't worth the maniacal tirades you had to endure from Pat on a weekly basis so I moved on down to Georgetown Harbor and started pulling in the big bucks.

In college, all us just under age kids would head to a nifty bar in Providence called Finnegan's Wake on Thursday nights to hear a fella named John Corcoran doing his Irish music thing. Gotta love the Irish bars.

I loved O'Flaherty's. We rang in 2000 there. Saints and Sinners Literary Festival staged events there a couple of times before the storm, and it was perfect with the multiple bars and patio for registration and book sales.

I remember the year the electricity kept burning out in the Quarter; I think there were some ancient works under the streets and we had a lot of rain that winter, so they just started blowing out. I spent a wonderful afternoon right before Christmas - none of the shops could run credit cards with the power out so I went there to drink until Entergy got things under control. The shutters were wide open, the rain was pouring, the candles were lit, and the Guiness was a perfect temperature.

Yeah, I miss that.