Oil in the Air?

Ok, I can now post this video after getting permission from the folks in it.  One of my trip partners with Bonny Schumaker on our Friday flight over the BP spill site was associate producer of the documentary film, "The Cove", Charles Hambleton.

This video was shot after about a 4 1/2 hour flight over the following flight path....noted by the yellow lines, not the orange line: 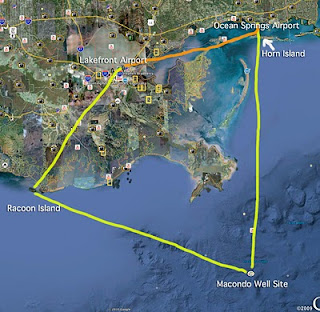 Here is the video of Charles showing some of the oil on the port side strut of the airplane:

Now I have no idea what is going on or how the oil covered the plane.  All I can tell you is that I don't believe it was sea spray as it was a calm day and we were never really that low to the surface of the ocean.  I am open to any explanations.

That oil on the plane might be airborne particulates caused by flaming the methane -- which undoubtedly contains lots of other stuff.
But they weren't flaring that day, and I don't think they were the day before either.  That sounds plausible but would that stuff hang in the air for over 48 hours?
Posted by Jason Brad Berry at 7/27/2010 11:59:00 AM

Fuck, this is so scary and sad.

Um, the (evil) Huffington Post has a story that a tugboat called the "Pere Ana C" has hit a well or something, and there is more oil gushing into the Gulf, from this new source of oily death and badness.

true but no big deal. it will be fixed lickety split,

dude, yesterday my cistern / rain barrel had a little oil sheen on top.

this has never happened before.

i aint no nut , but even i had to say what the fuck.


p.s. do you make up your word verification?

What was the air temperature along the flightpath? If you were going along and you went from a cold patch to a warm patch, there's a chance that vaporized hydrocarbon could have condensed on the chilled airframe. Similar to water vapor on the coils of an air conditioner. I've never heard of it happening, but then again, there's never been nearly this amount of vaporized hydrocarbon in the air. It's the most plausible explanation I can come up with.

Also, it's relatively rare, but hydrocarbon can dissolve in water, but only in quantities of ~20 ppm.

thanks clay for some engineering sanity.

i think there might be some petroleum in my shingles.

there was record heat and many day of no rain.

ashe your word verification is siber.

"Some of the oil evaporates," explains Edward Bouwer, professor of environmental engineering at Johns Hopkins University. That’s especially true for the more toxic components of oil, which tend to be very volatile, he says. Jeffrey W. Short, a scientist with the environmental group Oceana, told the New York Times that as much as 40 percent of the oil might have evaporated when it reached the surface. High winds from two recent storms may have speeded the evaporation process."

I wonder if they can find a lab that will test a sample. It's certainly worth looking into.

If that is petro contamination then the workers below will likely need better protection. When the ROVs surface, you never see ship personnel wearing respirators or masks. Not even when the gusher was going full blast.

In regards to Anon's comment about a sheen on rainwater:

Bacteria can also leave a rainbow sheen. From what I've gathered on the net, a bacterial sheen will readily break up when disturbed and an oil sheen will swirl rather than break up.

If you collected a sample, put it under a blacklight (a real one, not a crappy incandescent bulb with a filter). If it fluoresces, it could be raw crude oil.

Another thing to check out: get a sample of the engine oil used. If it doesn't flouresce, then that's another pointer towards Macondo crude because most refined crudes don't. If it does flouresce, it's the additives in the motor oil that help with lubricity, etc. The source of the coating on the wing strut could be a leaking engine.

Just throw out a couple of tests to narrow things down instead of leaving things just hanging out there.