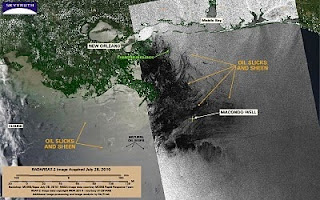 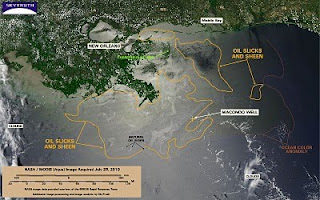 Both these satellite images were taken on July 28th, two days after I took the stills in the previous post.  That splotchy pattern on the bottom picture is indicative of what we were seeing in the fly over.  I described it as looking like a Pollock painting.  There is some argument that what I was shooting in deeper water was depth changes or riplines....I don't believe that is the case because these patterns were circular and isolated.  The patterns were erratic and that satellite image is spot on compared to the stuff we saw.
Posted by Jason Brad Berry at 7/30/2010 12:02:00 PM

That looks nothing like the oil spill extents which are derived from the satelite anomolies for the 28th looks alot closer to the 24th, not saying you did some photoshop but......

if you want to know what imagery was being picked up the day you flew take a look at this. It is from the SLAR Dash 8, enjoy. This doesnt represent all oil either as it picks up seaweed and natural sheen.

I haven't deleted any of your posts fucker. Now you're trying to interpret what I saw and tell me there is no correlation to the sat. images? You're claiming I photoshopped the pictures? Was the NBC news report which showed the same things I saw incorrect as well?

Do you work for BP?

You really need to sell yourself as a fox analyst, For someone who wasn't in the plane and seeing the thing we were, and NBC news was, you seem to have it all figured out.

I deal with the oil extents each day and oil observed. I work with analysts who actually distinguish from radar and satellite what is oil and what are false positives (something your buddies over at skytruth obviously don't do)

i have seen more photos of oil over the gulf then you can imagine and have seen the heavy oil, the medium oil, and the sheen.

the funny thing is the day you flew there were actually vessels skimming surface oil 15 mi south of dauphin island, however, you were too busy looking at cloud shadows, seaweed, convergence lines, and depth changes to notice.

Oil is certainly in the Gulf, and lots of it. But your pictures from the plane were mostly not of oil. They were of sargassum and current/water change.

Don't try to be an expert on these things because you aren't. Your photos can be used to discredit all of us who know what we are doing.

So let me get this right, now the satellite images are false, NBC is lying, I'm lying...what else?

And by the way as I stated before there were boats skimming in the areas I shot those pix, including Lake Borgne, so you may want to key them know they are skimming cloud shadows, seaweed, and riplines.

OK, dudes who know what you are doing, where are your sites posting footage and pictures you took the time to go and shoot?

How much of your time and money are you putting into bearing witness?

How many people are you cold calling and setting up interviews with to try to understand this mess?

And where are the fruits of your labors?

Aside from coming on this site and talking shit, are you doing anything to educate all the rest of us who are worried and sad?

If you could do it better, why don't you?

Some of those pictures sure as hell looked like oil and dispersant to me.

Others, I've looked at them a coup-le of times, and, no offense, Zombie (and I'll bet none taken), I think maybe ya had ta be there.

But our Zombie WAS there, and he told us what he saw.

He's not claiming to be an expert, just a man who cares enough to be an eyewitness to the worst thing that has ever happened to his home, and to be our eyes, too.

I am grateful to you, Dambala.

You have no idea how much you mean to us. Thanks.

How is it that you guys do not understand what a good thing Zombie is doing?

Why don't you see that?

If you could offer a more trained set of eyes, DO IT.

Go rage at yourself for not doing it before you come here and diss our Zombie.

Criticize constructively, explain things, and everyone here will welcome that.

But come here to fling poop for kicks, and I say, fuck you.

If y'all are such experts, why are we so deep in the shit?

Where were you "experts" before this happened?

Why are we 100 days into this, if there are so many fucking "experts" on the case?

If you guys were "experts", why didn't you say it was unwise to drill that well so deep?

If there were "experts" on the case, why were there no plans for what to do if there was a fucking blowout like this?

We are drilling that deep because the Elected Leaders of this country (not my vote) will not let the oil companys get the vast oil reserves in the shllows depths of our oceans forcing the companys to go deeper. Place blame where you want bottom line is its being cleaned its unfortunate that it happened. But we do not need people yelling fire for no reason. The oil is being cleaned as best it can be. there are thousands of assetts being used to track and capture everything they can. And im sorry but the I believe the word of the image analyst sitting here that looks at this stuff day in and day out to make the call not a blogger. Thanks for the help but your making this worse.

Image analyst? What image analyst? How am I making it worse by posting pictures of what we saw? You cab shove your head up your ass and believe whatever BP tells you that's fine. As a matter of fact why don't you go down to Ocean Springs beach and jump in, get a big mouth full of water and do your thing. Good luck.

Soooo stop doing the Industry Mantra of blaming the Feds here. We didn't drive you to these depths, but competition did.
Avarice, hubris and greed shows in your recklessness.
And cowardice bleats from your defense and misdirection of your own failures.

Thanks Ashe. Anon 2:50 covered all the rest for me.
These PR Astroturfers are everywhere, all over the country, pushing this New Brand Narrative of Disappearing Oil. From the looks of it these two Mike and Anon aren't even in Louisiana. You can tell not just from their rhetoric but also from their references. I'm being nice here out of immense respect for your work in general and particularly on this oil catastrophe.
But I would add FYYFFs.

Image analysts? Seriously? BP was caught out faking photos of an incident room, weren't they?

Earlier posted comment said, "The oil is being cleaned as best it can be. there are thousands of assetts being used to track and capture everything they can."

I have to agree that this person does not sound as if he is anywhere near this place. The thousands of assets ( "assetts")
you mention that are being used to track and capture everything they can I see as the capture of university scientists onto BP payrolls so they can't testify in court when Bp and Transoceanic et al get sued. And the thousands of assets are seen, too, in the BP PR people who are so lame in these town hall and community meetings it is sickening. "We will make you whole," & Feinberg certainly doesn't seem like he's down here to be any help to the residents who have been wiped out. Intimidating to them, yes. So that's another track and capture character we could do without.

And yesterday in Grand Isle we learn at their town hall that BP has brought in tanker trucks of diesel to run their operations down there instead of giving the business to the local guy who has the marina. That would be the marina that would have been doing a nice summer vacation business IF BP hadn't totally fucked our coastal area and gulf waters. But instead of giving their business to the local man they have ruined, they bring in tanker trucks from Texas to go along with their Texas contractors.

Having been through Katrina and watched this whole area teeter and then right itself because of the people, not the Gov or the NGOs or the contractors who descended on us and sucked money out of our recovery funds like disaster junkie hyped up vampires, I am sickened to read this blather, these banal phrases of yours. The water is not okay, it doesn't look okay, the animals we usually see out there are not there. There were lots of them suffering in the oil, and now they are not there to be seen much at all.
Dead. Yes. Many are dead.
A few reports from our scientist friends who fly and go in boats to do inspections tell us and show us images of islands that have some bird life but many are gone now after the 100 days of horror. The summer is usually plentiful with flapping, splashing bird, fish and mammal life. Incredibly bad that this happened right at their reproductive time.

Whats a natural sheen? I helped delvelope the haz-mat and oil spill response teams in Hawaii and we never heard of or saw a nutural sheen.

And why is Mike so worried about what is posted here on the AZ apprently you must be pissing people off with your reporting.

Keep up the good work Dambala!!!!

As for Mike and the rest of you hacks GO FUCK YOUR SELF. I wittness first hand how the gov works. I have taken part in leaving people out at sea to die because they were black, I let buildings burn down because the replacement cost was worth more than saving it, Thers a book at the MSO office in Hawaii with a possible 150 waste site, when we went to start our investagation into these sites the book was taken away from us and told that this was not or problem, We found out latter that the land that these sites were on either belonged to Dole or politicians and the waste was from militay.

So educate us as to why we should belive anything that any gov angency says.