I just saw this email from Krewe of Truth today:


AMERICAN ZOMBIE exposes more inappropriate behavior in Cedric's management of
your tax dollars that went to non-profits supposedly set up to serve low-income residents. In fact,
of money received, only 2 percent actually went to help children. Sad. I will add this to what ZOMBIE exposes: the building that housed the non-profits in question is the same location where several candidates I worked with pre-Katrina would meet Ike Spears and Blair Boutte, who are running Cedric's campaign, to pay campaign workers, get t-shirts and campaign material, etc. Not good for a "non-profit" office.
That is also in direct violation of the LSED grant agreement: 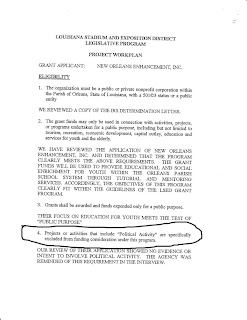 I think an audit needs to be conducted on every 501c3 Richmond is associated with or has recommended for grants.  Is his current campaign office associated with a 501c3?  I would bet my bottom dollar there are more non-profits out there he is abusing in one way or another, I just haven't found them yet......yet.
Posted by Jason Brad Berry at 8/19/2010 09:43:00 AM

The conductor only decides the speed, he does not decide the course. The track has already been laid, the destination already determined.

You will pass by where others have gone, as they have gone, and as others will go. Over and over, riding the rails to infinity, the thundering clang of iron on iron.

The young passenger didn't know where he was headed when the train left the station, but he should have. He boarded the one called styx, to the land of dreams, through the world of nightmares.

And so we ride, as he does, ever faster, ever closer, but yet ever farther, from the land of dreams.

I think I'll wait on Dambala and his "more to come". The criptic shit makes my head ache.

Dude you should stop reading this shit then. Don't keep giving yourself headaches.

Zombie you started a trend. Chet Traylor is also telling Diaper Dave to "man up". http://tpmlivewire.talkingpointsmemo.com/2010/08/vitter-threatens-to-sue-over-brutal-radio-ad-audio.php?ref=fpblg
And Vitti is squirming.