Just two months after Ken Feinberg told the Louisiana victims of the BP oil spill they'd be making "a big mistake" to not sign on with his claim settlement process, he seems to be straying from that sentiment:

He said he might set aside money for the Florida tourism industry outside the $20 billion Gulf Coast Claims Facility; he also urged businesses to seek help from lawyers experienced with large damage cases. 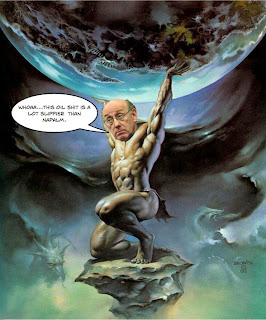 This is gonna be a long, hard battle and once again, your government has done the photo ops and made the empty promises then left us to our own device.

The good news...this time our destructor isn't a government entity which can't be sued or held responsible like the Army Corps. of Engineers...this time it's a private company and we have the power to hold them fiscally responsible.
Posted by Jason Brad Berry at 9/16/2010 03:56:00 PM

What the fuck dude!!!!
They got their education from exxon.
Thanks to pbo were gonna get bent over again.