I found it to be a specious claim the moment I heard it but apparently Judge Zeno took her word and granted the Mayor full control of the City's portion of the Wisner funds.

In fact, he apparently took the city attorneys' word on everything,  even going so far as cutting and pasting part of their counter-motion into his own "judgement".  That cut and paste job was just about the only explanation he provided in any of his rulings which gave Mayor Landrieu practically everything he asked for.

I was pretty sure the City Council claim was a smoke screen when I heard it but I wanted to check and see if City Council members were aware that the Mayor's office considered them to have any oversight with the City's portion of the Wisner funds.

I spoke with two City Council members about the issue, Stacy Head and Susan Guidry.

Councilperson-at-Large, Stacy Head, told me she had looked into the matter back in February and had asked the Assistant Fiscal Officer to the Council, David Gavlinksi, to do the same.

Councilperson Head forwarded me an email chain between her, Gavlinski and City Council President, Jackie Clarkson.  I condensed the messages into this document according to date:

City Council Email Thread on regarding the Wisner Trust 2013

This is what the municipal code states in respect to the Council's involvement with the Wisner funds:


DIVISION 4. – EDWARD WISNER DONATION ADVISORY COMMITTEE
Sec. 2-159. - Function.
Subject to the control and direction of the council, the powers, duties and functions of
the Edward Wisner Donation Advisory Committee shall be the supervision, direction
and administration of all of the lands, funds and avails constituting and comprising the
Wisner donation, or the avails or fruits thereof, and to consult with and advise the mayor in his capacity as trustee upon all matters pertaining to such trust and the mayor when acting upon the advice of the committee, or a majority thereof, shall be deemed to be acting for and in behalf of all the parties at interest. To that end all matters relating to the trust shall in the first instance be referred to and handled by the committee.  (Code 1956, § 19-4)

Gavlinski goes on to offer an opinion (not legally binding mind you, just an opinion) of City Council's role with the Trust:


Of interest is a section on page six of the attached, which reads:

“… the Mayor of the City of New Orleans, with the approval of the Commission
Council (or its successor body), may act as such Trustee upon the advice and
with the consent of the majority of said Commissioners, and such action, so
authorized, shall be binding on all parties hereto.”

My reading of that is that the Mayor, on behalf of the City, has but one vote
on the committee. That vote is subject to approval of the Council, and must
accompany a majority of the committee member. I’m fairly certain that this is a
level of restraint that has not occurred over the years as any Mayor has seldom
come to any Council for their “approval.”

I think what he's saying is the law states City Council does have legal oversight but it was never actually put into practice.

Soooo...note to City Council:  The Mayor is ultimately subject to the oversight and approval of City Council on all matters regarding Wisner.

In fact, his lawyers just made that exact argument in Zeno's court.  They claimed that they shouldn't have to answer to The Wisner Trust Advisory Committee because they are already legally bound to answer to City Council....Zeno agreed.

The problem is City Council had no idea that they were responsible.  At least the two At-Large members on the Council didn't know, as evidenced in this email chain.  Nor did the third councilperson I spoke with, Susan Guidry.

I'm not criticizing the council members in any way for not knowing this, they are elected officials that came into their jobs following the practices of the council members before them.  The modus operandi and annual budget agenda never included a breakdown of The Wisner grant money.

I believe Gavlinski states as much in his response to the council members after researching the matter:


"It appears as if we have nearly a century of operational inertia whereby the
Council has not appropriated all the funds, even though this practice may
be contrary  powers in the above referenced code. Alas, the Mayor may be
right in one respect, but it seems clear that the fund has operated outside of
complete Council authority in the past.

I believe that historically, there has been more harmony between the chair
of the Committee and the rest of its membership, so this issue may have not
arisen as acutely. "

Apparently, the issue never came up until now.  Regardless, once again, here's a note to City Council: YOU ARE THE OVERSIGHT BODY.  In fact City Council is now the ONLY oversight body.  The Mayor's counsel just lobbied this admission in a court of law....and the judge agreed.

I suppose the person we should consult is the Special Counsel to the City Council.  I'm sure that appointee could provide an objective legal opinion on the matter, eh?  Because whoever holds that position would not be privy to the mayor in any way, eh?

As luck would have it, the City just accepted RFQs for that position and four law firms applied.  I'll give you three guesses as to who one of those firms is and the first two don't count. 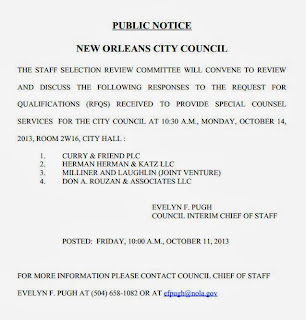 Funny stuff, huh?  The one critical position with City Council that is supposed to be objective and independent of the executive branch of city government (the Mayor's office) and Herman and Herman are applying for it.  I'm sure there's no conflict of interest there...nah....

...seeing as how they are representing the City and the Wisner Trust in their settlement case against BP...

....seeing as how Herman and Herman members and family members comprised the single largest bloc of campaign contributions to Mayor Landrieu in 2012...