I stopped posting on this blog because of the severe emotional and financial burden it became.

I also realized....there is no recourse.  You can tell people all day how corrupt things are but at the end of the day...nothing will happen to change it.

Having said that....I'm repeatedly asked "Who was the worst politician?!?!"

My answer is always the same...the politicians can't hold a candle to the Judiciary.  The amount of money involved in politics is a joke compared to Multi-District Litigation (MDL) and Class Action lawsuits which magically tend to land in the Eastern District of Louisiana.

So....who do I think is the most corrupt?

There are some brave lawyers who have been trying to expose what is going on with not only the BP MDL, but MDL's in general.  They have all been met with vindictive and resentful actions...with the full force and vengeance of the Eastern District and the usually impotent Louisiana Attorney Disciplinary Board.

The BP MDL was a litany of graft...with Carl Barbier, Jr. serving as the gatekeeper.

History...possibly....will tell this story and expose it for what it is.  I hope.

In the meantime...you can read how some brave lawyers are trying to right the wrongs. 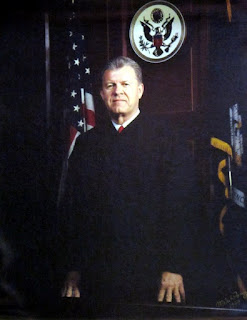 ...is anathema to justice and democracy.

The height of corruption in a state famous for it....is Louisiana's  Judicial system.  And Barbier is the poster boy for that corruption.

Nothing will ever change in this state until those who call themselves "journalists" start reporting on our Judiciary.

Nothing will change and we will be at the bottom of the barrel in perpetuity.