There is probably no more contentious subject in New Orleans than the epic battle between developers and preservationists.  I honestly think this subject rises even above that of race in this city, although race is always at the crux of land use conflicts.

With public land, it's especially heated.

Despite all of our governmental inadequacies and cultural clashes, I honestly think New Orleans has done a pretty good balancing act in respect to preservation and development.  I know there are those reading this from one side or the other with mouth agape at that sentiment but hear me out for one second.

From the late 70s to the present if you look at the history of development in the heart of the City, the CBD/Warehouse District and the French Quarter, I think the balancing act between the two sides has been rather impressive.

Don't get me wrong, there have been major faux pas as well, i.e. the Hard Rock (and anything Kalais does for that matter), the lack of development on the Riverfront from the crumbling Governor Nichol's Street Wharf to the derelict Market Street Power Plant, to the most expensive radio tower platform in history - the Plaza Tower - eventually falling in to such a state of disrepair they couldn't even put antennae on it.

There is a lot of neglect but there is still a lot to admire.

The French Quarter speaks for itself.   There is nothing else like it in this country and there will never be anything like it because it has been religiously guarded and preserved for decades.

Almost as impressive...look at our Warehouse District.  Pre-1984 World's Fair, the area was largely a dump which could have easily been razed to clear the way for cheap fabricated crap that is all too familiar now in many urban landscapes across America.  Instead, it was both revitalized and preserved and at the time that vision was pioneering in the U.S. as we slipped into the reality of post-industrial urban landscapes.  Much of the Warehouse District's rebirth can be accredited to two developers, Pres Kabacoff and Ed Boatner, and their company Historic Restoration Incorporated (HRI), that leveraged "Public-Private Partnerships" with the city to restore and repurpose many of the derelict factories, mills and warehouses into livable spaces. New Orleans Warehouse District actually became a model for other cities facing post-industrial blight.

I know some of my friends just read that and said, "This can't be Jason writing this."  Well....it is.  You have to give credit where it is due and I don't think anyone can look at the New Orleans Warehouse District and say it isn't a triumph.  I have other issues with Kabacoff as I'm sure many people do but he and Boatner deserve credit here.

Now, on the flip side of the coin, look at Daryl Berger's sweetheart public/private deal he finagled at about the same time (early 80's) on Decatur Street in the Quarter.  He managed to land about a four block stretch of the most valuable real estate in the city...on the Riverfront....in the heart of the French Quarter....for about a million bucks.  The original agreement with the City was that he would develop the land into businesses that would serve as job creators.  While he did build the Jax Brewery, he kicked the can down the road on the remaining plots of land claiming financial hardship due to the oil bust that saw an exodus of big petroleum companies flee New Orleans for Houston and Dallas.  As much as I've looked into this deal I still don't understand what the oil industry had to do with development in the heart of the French Quarter.  Regardless, he was eventually let off the hook after then Councilperson Jackie Clarkson (self-ascribed real estate expert) got a resolution passed through Council to absolve him of the original terms of the deal.

I've looked into it and I still think the he's in breach of the original contract and there is no statute of limitations on a civil contract of this nature.  Not that the City would ever pursue it but I'd be curious if any lawyers weighed in on it.

Original point being....we now have the exact opposite of what the deal was designed to do...create jobs.  Instead, most of that once public land was converted into private open-air parking lots for nearly half a century that may employee one person at minimum wage while generating millions annually.  I can't begin to fathom the ROI on this initial one million dollar investment in what was undoubtedly the sweetest land grab in the history of the city.  I mean mad props to him for pulling that off but we are still publicly paying the price for it, exponentially, as time progresses.

While the HRI Warehouse development was one of the first successful public/private ventures in the city, even the country, the track record for public/private partnerships in New Orleans since then has not been so rosy.  In fact, developers quickly realized the benefit of using public money to develop private real estate ventures and.....you know where this story goes.  Politicians...handouts....back room deals....the only business that never falters in New Orleans.

I could spiral off into a tangential void on so many examples of public/private chimeras that have not served the best interest of the city and how it's become it's own "game"....I mean LaSalle Street/LSED/Champion's Square for fuck's sake....but I must resist to get to my actual thesis here.

Having researched the history of public/private developments in NOLA, it's occurred to me the line has become so blurred that our government officials are even confused as to their roles and job descriptions.

Nowhere in the job description of City Council does it say "Junior Developer!"  It's not a council person's job to dream up new land developments in their districts....their job is to create budgets to maintain the existing infrastructure needed to run their districts and make sure that the work is completed.  They may vote on whether or not to allow developments but they aren't supposed to be sitting around dreaming up shit they think is cool while our electricity goes out every other day, our streets are nearly impassable and....ahhhggg!!!! You know the rest.

Case in point,  I live on the Wank, right off MacArthur Blvd.  If you haven't heard (and most of you probably haven't because we're kind of on our own over here in Lower Algiers) the city just saw fit to put in the most ridiculously designed bike path grid on the boulevard one could imagine.  I mean...it's so gloriously fucked in respect to the actual traffic patterns and needs of the community I can't even describe it.  I can imagine some city planning dude sitting in an office on the West Coast looking at Lower Algiers on Google Earth and thinking "Oh yeah...this is just like that neighborhood in Portland...I know exactly what to do here!"

No dude...no....we are not Portland.  We are not a city that enjoys actual functional city services.  You can't use a bike lane that is blocked with tree limbs, trash cans and water pooled up from clogged storm drains.  They decommissioned an entire lane in order to make riding a bike down the street more dangerous than what it already was.  I'm serious....I got nothing against riding a bike, I have a bike and I ride it around the hood.  I'm not joking when I tell you it was easier and safer to get down MacArthur for bicycle and motor vehicle before they did this.

Why did our District C Councilperson, Kristin Palmer, promote spending millions of dollars on this fuck'snu?  It was developed by the non-profit Bike Easy but there seems to be an ulterior private interest at play regarding a bike rental business, e.g., Blue Bikes.  In a town hall meeting there was even a mention of "tourists" utilizing the bike lanes here in Lower Algiers.

Once again...public money being utilized to springboard private interests.  This is the disease that public/private ventures have wrought and the subsequent mindset that has developed among our elected city officials.

Message to Council candidates: YOU ARE NOT DEVELOPERS.

Meanwhile....the 120 acres of public land that is Brechtel Park in Algiers has been an unkept jungle since Katrina.  City Council voted to increase the millage to Parks and Parkways along with juicing up the public/private Chimera that is Audubon a few years back but we can't even get the basketball backboards put back at Norman Park, our local park right off MacArthur, since they took them out because of Covid.

Back in November the only remaining building at Brecthel Park caught on fire, probably from a homeless person camping out there (and I'm cool with that because at least it was being used for something).  Instead of razing the building...what did they do?   They put up a chain link fence to keep people out.

The uptown crowd has a great park, Audubon, on the taxpayer dime.  Their first world problems were whether or not to leave the golf course or turn it into more plush green space.  Our dilemma was apparently whether or not to raze the 17-year derelict golf building that caught on fire or just put up a chain link fence to save some cash....they chose the latter.

If you can't do your job and maintain the infrastructure in your own district, you have no business dreaming up new ways to spend millions of taxpayers' dollars and trying to implement it against the will of your constituents because you think it's hip or you feel the need to leave a legacy.  I'm looking squarely at Mrs. Palmer.  And I haven't even mentioned the pedestrian mall bullshit she was pushing in the Quarter that literally NO ONE wanted but her.

Now she's sending out the weirdest, narcissistic flyers I've seen in the history of NOLA politics (that's saying something) about how she was a little girl who grew up to be a big girl to fight crime in the city. 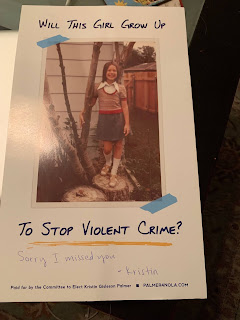 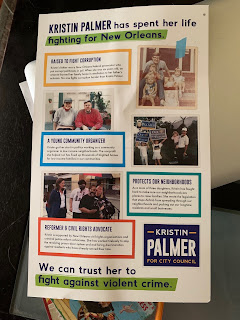 Is she Batman?  Is she moonlighting as a vigilante and we didn't know it?  I mean that flyer would make Ronnie Lamarque blush.  Morris Bart would pucker.

And what is that "Sorry, I missed you!" quip?  I'm sorry she didn't read her job description before she ran for public office and realize she isn't the police chief.

Message to council candidates 2:  YOU ARE NOT BATMAN.

It's not your job to "fight crime".  You have no credentials to do so.  If you want to do that, join NOPD.

But it's not just Palmer, it's our Mayor as well.  That's part deux which is about Part-Dieu...all that is sacred in this city....Armstrong Park and Congo Square.

The entire "bike lane" project was put together with a push poll that specifically targeted cyclists at the expense of every other road user.
And it probably doesn't hurt that the guy in charge of the program office at the Office of Transportation is also the guy who helps run local bike lobby.