My favorite commment so far...

What a pathetic, hissing little pack of heaving vampires! As for you, dambala: you need to get your sick mind around the fact that there’s no point trying to claim higher moral or intellectual ground on anyone while you’re spewing forth vulgarities and pounding around on all fours in your own filth. You are no doubt an inspiration to vile right-wing freaks everywhere.

PS - "Comment moderation has been enabled"?? Is that some kind of zombie in-joke??

but Lilith, predecessor to Eve, vulgarity spewing is so much fun! Forgive me, but it is the nature of a child of Dambala to writhe in the snakepit and spit venom on occasion. 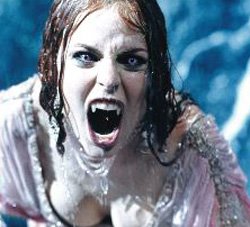 Thanks for the feedback.

So even in 6000 B.C. (if you believe Old Testament chronology), people had dirty minds much like me.

In our modern culture, Lilith has taken on a newfound respect from feminists who have discovered the myth, mostly thanks to Sarah McLachlan and her Lilith tour. Now, Lilith has come to represent female independence and empowerment over male oppression and influence. Don't you just love happy endings?

So thanks for posting your name with the comment...it provided a strange synchronicity to your perspective.

Oh...and comment moderation is turned on because of the political nature of the blog. I filter comments which I suspect are grossly innaccurate or that aren't pertinent to public officials in the misuse of of public funds.