Titanic on the Bayou 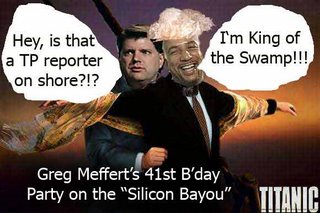 Gordon Russell and the TP are on the trail, or should I say in the wake of the lifestyles of New Olreans rich and infamous public officials.

Here we have New Orleans politics as usual...manipulating a city contract for personal gain, bullshit emergency procurements, strongarming employees into personal politics with veiled email threats...and not so veiled ( Kurt's F-bomb email was priceless)..and they're just scratching the surface.

I give you an unconfirmed (deal with it...it's a blog beeoootchh, I'm not the NYT) report:

A TP reporter apparently picked up the scent of something fishy going on with Meffert about 2 years ago, and started filing for documents under the Freedom of Information Act. Meffert and the Imagine crew let their imaginations run wild and basically freaked. They literally shut down the entire city server system (payroll for city employees, everything) in order to wipe out all emails stored on the email server(s) to ensure that the information couldn't be obtained by the TP. They performed this feat under the guise of a "System Software Update" which after completion, accidentally erased the email server archives. Doh! Convenient isn't it?

If this report is accurate, there must be city employees in the IT department who are aware of what happened. I wouldn't be surprised if Paul Bible, listed in the TP story, isn't aware of it. If they did in fact erase the emails that is a clear violation of law...destroying public record. It would probably be nearly impossible to prove in a court of law, but I'm sure there were city IT employees (non Imagine) that knew what was going on. I would love for one of those employees to either confirm or dismiss this story...so if you're out there, please post a comment on this post about the plausibility of this story.
Posted by Jason Brad Berry at 9/20/2006 07:55:00 PM

you sir are my hero. thank you for being here in new orleans and caring about her.

Hardy impossible to prove. You need one whistle blower who saves off all of his email. I have a large (almost 1GB) Lotus Notes archive of my last 2-3 year of email. I'm pretty sure that would be admissible in court. Then, you take similar data from a city employe, and ask the city for its' email logs and data to substantiate it. They go," uh, um, well, you see, we accidentally erased it all." Enter expert witnesses, stage left, and they go down.

Dambala, you are right on the money!!! My sources tell me that, during the time that Kimberly Butler was being ousted from the Nagin administration (around March, 2002), the Meffert "Dream Team" discovered that all the email traffic being sent via their Blackberries was being saved in the Microsoft Exchange Server in the city's server room. They also determined that, if you send your messages to the recipient's Blackberry PIN instead of their email address, then the message bypasses the Exchange server. Armed with this information, they could no longer be traced via an email history and could circumvent the "Public Record" problem.