I would love to see him win the RNC primary... 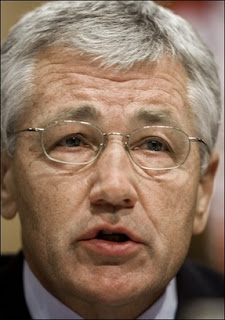 If you read this blog, I'm sure you've surmised I'm a liberal democrat. I grew up in a labor union family. The thought of owning any vehicle other than a Ford, Chevy, or Dodge was blasphemy.

However, I am not anti-republican. I understand the two party system and how it's supposed to work. I have great respect for political balance...I just know which side of the fence I'm on. While I haven't made up my mind yet on who I would like to see lead my party into the '08 election....I'm quite sure on who I would like to see get the RNC nod.

Hagel has an announcement tomorrow on his intentions...I'm keeping my fingers crossed. In the meantime, he used the "I" word in a recent interview about Bush....told you the man has brass cahongas.

Meanwhile, the Corporatocracy continues it's rape of our country under Bush and Cheney's tutelage...Halliburton is moving it's headquarters to Dubai. For all you republicans who continue to believe these assholes are members of your party, take note....those billions and billions of dollars Halliburton reaped from war profiteering will never grace this country's shores again. That money will stay in a bank in the U.A.E. It is gone forever, just like the 3193 American soldiers who lost their lives in order for Halliburton to reap those profits.

This country is so far off track...I am beginning to doubt we will be able to right ourselves. It's going to take men of character and integrity to pull us out of this abyss. I think Hagel qualifies.