the answer to the democrat's conundrum.... 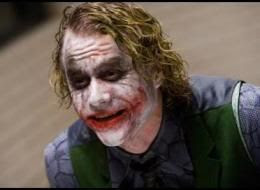 use the Joker...pull out the wild card.

The answer to the Democratic Party's problem is for a number of high profile super delegates to pledge to support the candidate that does the best job of campaigning against McCain. I just heard Mark Shields say something to that effect on TV, but I really thought I had said on my blog. Alas, I can only find it an email to somebody, but I hoped that both candidates would decide on their own that that was the way to impress the super d's.

They can only give it to Gore if both Clinton and Obama appear to be on the verge of going down in scandals or something equally damaging. If either candidate dropped out in favor of a draft Gore movement, the supporters of the other would feel robbed.

Or was it that you thought that the DNC could "Heath Ledger" Hillary?

Side note: I finally got around to watching "An Inconvenient Truth" just last night. And maybe this is because I've already read or heard most or all of the actual information presented in the slide shows, but the two things that movie impressed upon me are 1) Al Gore is indeed an insufferable douchebag and 2) The filmmaker is in love with him or something.

The slide show itself is very well done and Gore does a fairly good job presenting it... during the parts where he isn't talking about himself.

I would have very much liked to see a film of only the slide show presentation. The scenes of Gore talking on the phone, Gore ruminating about his family, Gore hanging around at the airport, and the long and unnecessary 2000 election montage all made me want to throw things at the TV.

I know that Gore gets the crap unjustly beat out of him by the idiot press. But his victimhood in this regard does not necessarily make him a tolerable person otherwise.

And remember this is coming from a guy who would vote for Gore if he were "drafted" I think that ought to tell you something about what the rest of the electorate thinks of him.